People with visual disabilities use a smartphone app that tells the user what color a traffic signal is, along with other information. (Kosuke Tauchi) 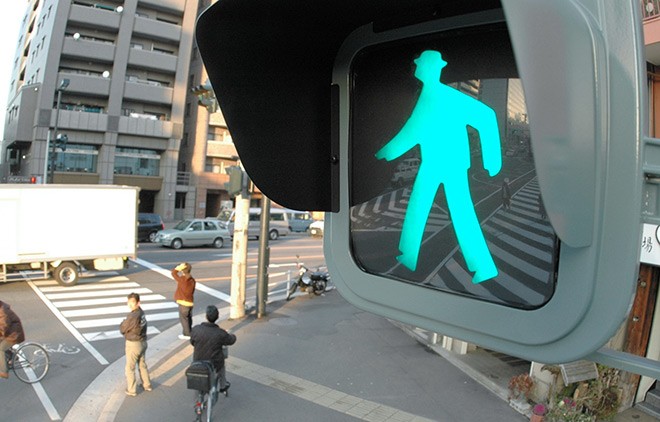 The National Police Agency is moving to create a nationwide system based on a smartphone app that informs blind and visually impaired people the color of traffic signals at intersections.

Noboru Mochizuki, 65, a blind acupuncturist who downloaded the smartphone app for traffic signals, welcomed the decision.

The Fuji, Shizuoka Prefecture, resident said he has had some close shaves while crossing and a car once hit his white cane and broke it.

“I risk my life when I go out by myself,” he said. “It’s a bit complicated to use a smartphone, but it makes a big difference for me to know whether a light is green or red.”

The NPA has earmarked an additional 2.5 billion yen ($24 million) to its fiscal 2021 budget to install the communication device at approximately 2,000 signalized intersections and other locations nationwide.

Pedestrians who download the “Shin GO!” app on their smartphones get a voice-activated message when they approach a traffic light equipped with the system via Bluetooth telling them what color a light is.

The device, which has a function that tells pedestrians when a signal is about to change, also lets them extend the duration of green lights at selected intersections.

From 2017 to 2019, eight visually impaired pedestrians were killed and 66 suffered minor or severe injuries.

Two of those killed and 19 of the injured were crossing roads where traffic signals were present.

As of March 2020, an acoustic traffic signal for blind pedestrians has been available at approximately 24,000 locations nationwide, according to police.

Most of them are near train stations, local government offices or schools for the blind.

These lights are set for silent operation late at night and early in the morning to avoid noise complaints from residents.

But fatal traffic accidents can and have happened at precisely such times, police said.

The price of the communication devices for the new system runs to 1.3 million yen for a single one. In fiscal 2019, police installed them at 70 or so locations, including in Miyagi and Shizuoka prefectures.

So far this fiscal year, police have set them up at 60 or so locations, including Saitama and Fukuoka prefectures, and intend to expand their availability to Tokyo and Osaka Prefecture and elsewhere in fiscal 2021.

“The more traffic signals that are app-responsive become available, the bigger the number of users will be,” a police representative said. “We want to spread them throughout the country and make it safer for people with disabilities to cross.”

A fatal accident two winters ago was a catalyst for implementing the program, police said.

A 64-year-old man with impaired sight was crossing a road near JR Komagome Station in Tokyo’s Toshima Ward around 4:30 a.m. on Dec. 7, 2018, on his way to work in Chiba Prefecture.

The crosswalk was equipped with an acoustic traffic signal, but it was under silent operation from late night to early morning.

Police believed the man, who died after being hit by a car, unknowingly crossed a red light.

His colleague of 30 years said the man was always diligent and serious-minded and never would have crossed on a red light if he had known.

After the accident, the Japan Federation of the Visually Impaired issued a statement requesting alternative functions to ensure visually impaired pedestrians know the color of a signal when the acoustic system is turned off.

Police since then have been working to put a system in place that allows blind pedestrians to use smartphones and cross safely.

When Mochizuki tested the app and approached a crossing in Shizuoka’s Aoi Ward, a voice message from his smartphone informed him that its signals facing east-west had turned green and Mochizuki stepped forward to cross.

When traffic signals are not equipped with audio announcements, blind pedestrians must rely on the sound of moving vehicles and people around to make the decision on whether to cross.