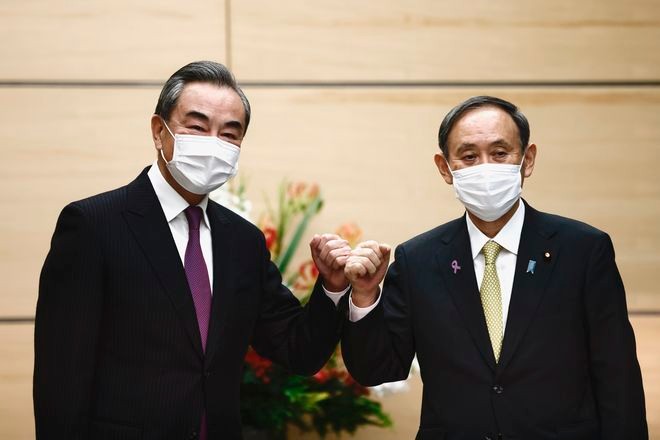 In his first high-level meeting with Beijing, Japanese Prime Minister Yoshihide Suga said stable ties with China were important, as his country pursues a balancing act with its neighbour.

On Wednesday, Chinese foreign minister Wang Yi met Suga at the end of his two-day trip in Japan, marking the first high-level visit since Suga was elected as new leader in September.

"A stable relationship between the two countries is important not only for Japan and China but also for the region and the international community," Suga told Wang in a meeting that lasted about 20 minutes.

The visit by China's foreign minister comes amid growing concerns over Beijing's assertiveness in the region.

While Suga has steered clear of the harsh anti-China rhetoric used by Japan's ally the United States, he has moved to counter its influence by deepening ties with Australia and choosing Vietnam and Indonesia for his first overseas trip.

Japan's security strategy is grounded on its alliance with the United States, but it also has pursued economic interests with China, its top trading partner.

Chinese President Xi Jinping wants to build "good working relations" with his Japanese counterpart, Wang said, citing a message from Xi that he delivered to Suga.

Wang met his Japanese counterpart Toshimitsu Motegi on Tuesday. They agreed to cooperate on trade and fighting the coronavirus, but maintained their stances on territorial disputes, leaving a security concern unresolved.

Japan and China agreed to resume coronavirus-hit business travel this month and to continue talks on disputed isles in the East China Sea.

"I hope both sides will handle the issue calmly and properly, so that stable improvement in ties and further development in Sino-Japanese relations won't be affected," Wang told reporters after his meeting with Suga, referring to the situation in the East China Sea.

Still, during Wang's visit, top Japanese officials reiterated concerns over China's continuing activity in the area, but Wang stood by Beijing's stance that it was protecting its sovereignty.

Japan's government has complained of China's "relentless" intrusions in waters around the islets claimed by both nations.

Officials in Tokyo including Suga also repeatedly expressed concerns to Wang over developments in Hong Kong, a politically sensitive issue for Beijing.

Meanwhile, both sides supported successful Olympic events, the Tokyo Olympics next year, and the Winter Olympics hosted by China in 2022.

Pushing forward a three-way free trade deal with Japan and South Korea, Wang is headed to Seoul and will to meet South Korean President Moon Jae-in on Thursday.