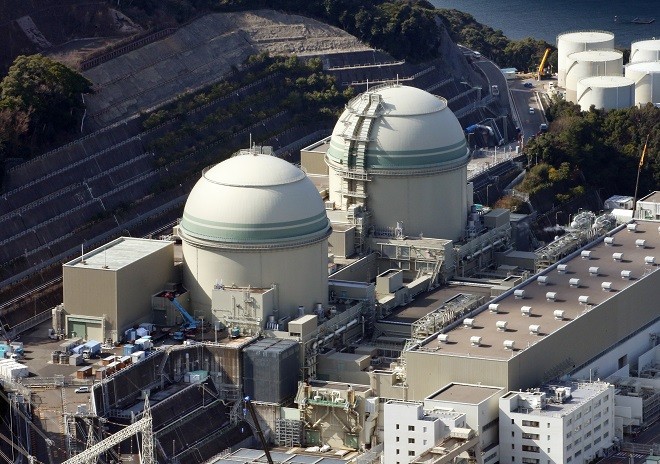 The No. 1 and 2 reactors at the Takahama nuclear power plant in Fukui Prefecture are seen from an Asahi Shimbun helicopter in February 2020. (Asahi Shimbun file photo)

Following the 2011 Fukushima nuclear disaster, new nuclear safety regulations were created to impose a 40-year limit on the operational lifespan of nuclear reactors in Japan.

The rule was designed to ensure decommissioning of aging reactors that are more vulnerable to accidents and make Japanese society less dependent on nuclear power.

But a provision that allows one extension of the legal lifespan by up to 20 years in exceptional cases, introduced in response to concerns about a power shortage, has been widely exploited to gain permission to extend operations years or even decades beyond the 40-year cap.

This troubling trend should not be ignored. The original principle should be maintained.

The municipal assembly of Takahama, Fukui Prefecture, on Nov. 25 approved the restarts of the No. 1 and No. 2 reactors at Kansai Electric Power Co.'s (KEPCO) Takahama nuclear plant, which first went into service in the 1970s.

The move came four years after the Nuclear Regulation Authority (NRA), a government agency to ensure the safety of nuclear power plants, gave the green light to plans to extend operations of these aging reactors, which went offline in 2011 following the triple meltdown at the Fukushima No. 1 nuclear power plant.

While the consent of the Takahama mayor, the Fukui prefectural assembly and the Fukui governor is still needed to bring the reactors back on stream, the municipal assembly’s approval is a first step toward operating a reactor that is more than 40 years old for the first time in Japan.

Behind the town assembly’s decision is the fact that the nuclear power plant has been supporting the local economy. But the move has raised the question of whether the assembly has given sufficient consideration to issues concerning the safety of local residents.

In a meeting to explain the plans to residents in Takahama held at the end of October, some attendees voiced concerns about the risk of multiple natural disasters disrupting traffic on the prefectural road designated to be used as part of the evacuation route in the event of serious accidents at the plant. There remain serious safety concerns as to the planned operations of the reactors.

Even more questionable is the government’s stance toward the issue.

Prime Minister Yoshihide Suga’s administration has vowed to reduce Japan’s reliance on nuclear power generation as much as possible by making all-out efforts to promote energy conservation and use of renewable energy sources.

But the Suga administration’s stance toward nuclear power generation is showing no notable difference from the policy of the previous government led by his predecessor, former Prime Minister Shinzo Abe.

The Abe administration left decisions concerning reactor restarts to the NRA and the local governments involved and didn't hesitate to bring reactors back online once the procedures for the step were completed.

In a sign that casts doubt on the administration’s commitment to reducing nuclear power generation, a senior official at the Agency for Natural Resources and Energy, an industry ministry body, has repeatedly visited the local governments of the host communities in Takahama to seek their consent for the plans.

In Fukui Prefecture, another aging reactor, the No. 3 unit of KEPCO’s Mihama nuclear power plant in Mihama, located along the coast of the Wakasa Bay, has been cleared by the NRA for operation beyond the 40-year legal lifespan. The Mihama town assembly is expected to decide on the restart in December.

KEPCO, which has been operating 11 reactors in Fukui Prefecture, including those at its Oi nuclear plant in the town of Oi, has decided to decommission four reactors at the Mihama and Oi plants. But it will still have seven reactors in service in the prefecture if the lives of three reactors are extended beyond the 40-year limit.

This means the local communities will continue being threatened by the safety risks posed by a concentration of reactors, which were underscored in a graphic way by the Fukushima calamity.

The government should demonstrate a clear commitment to scrapping aging reactors while supporting private-sector investment in renewable energy sources. It also should work with the local administrations in areas that have been dependent on nuclear plants for their economic well-being to carve out futures not dependent on atomic energy and provide policy support to their efforts to achieve the visions.

It is time for KEPCO to change its business strategy.

The utility is still halfway to its goal of regaining the public confidence that has been deeply undermined by a series of scandals including one in which company executives received gifts from a former top official at the Takahama municipal government.

The utility has promised the prefectural government to find a location outside the prefecture for an interim storage facility for spent nuclear fuel at its nuclear plants in Fukui Prefecture. But the outlook of this mission remains murky.

A responsible utility would pull the plug on the operations of aging reactors whose viability is in doubt economically as well as technologically and reinvent its business strategy accordingly.