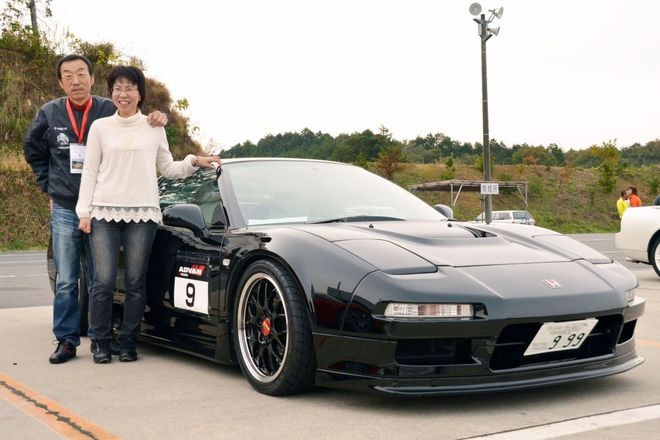 Hisashi Yamada, left, and his wife, Sanae, pose beside his NSX, which is now driven by Sanae following his death. (Provided by Hira)

KASUGAI, Aichi Prefecture--In her 50s, Sanae Yamada has shifted her life into fifth gear, thanks to her late husband's beloved NSX vehicle.

She's now driving the five-speed sports car that Hisashi purchased before his death in 2013.

When Hisashi died, many NSX owners made the long drive to Kasugai to give him a fitting send-off in style.

Led by the 14 iconic NSX vehicles, made by Honda Motor Co., a hearse carrying Hisashi and Sanae made the final drive to the crematory so her late husband could "hear" the powerful engine sounds of the model he loved.

Socializing with the close friends and operating the vehicle left by Hisashi, Sanae, now 55, is enjoying her second life.

“It's all due to Hisashi-kun,” she said.

AUTOMOBILE LOVER GETS HIS DREAM

In May 2005, Hisashi, then 48, who ran a woodworking studio here, was diagnosed with gastric cancer. He underwent surgery three months later to remove two-thirds of his stomach.

Around that time, Hisashi began telling Sanae that he had only a little time to live.

Hisashi was an automobile buff but was advised by his father to drive a cheaper vehicle, because his “customers may not like seeing you driving an expensive car.” For that reason, Hisashi used to buy only inexpensive vehicles.

Deciding the time was right, Hisashi purchased a used NSX for 5 million yen ($47,900) because he had been coveting the model since its release. Hearing about his plan, Sanae did not oppose the purchase given that Hisashi was using his own savings.

Although Hisashi hoped to find an NSX in the popular red color, he could not locate a suitable one. He finally settled for a black NSX made in 1991.

At first sight, Sanae likened the NSX to a “cockroach” due to its shiny black short and flat body. But Sanae, seated in the passenger's seat, found it refreshing to ride in the NSX in the wind at high speeds sitting just above the road.

One day, a red NSX pulled up near Hisashi’s vehicle at a light. Although the drivers did not know one another, both waved in greeting before they drove off in different directions.

Inspired by the experience, Hisashi became interested in going to meetings of NSX owners.

When Hisashi attended a gathering in Gamagori, Aichi Prefecture, in 2008, he found the red NSX parked at the venue. Participants in the event, including Hisashi, later set up an NSX owner's group called Weisse.

In January 2011, Hisashi was diagnosed with cancer metastasis. While receiving treatments, he took part in five NSX trips a year and the monthly meeting.

At his final session on March 9, 2013, Hisashi chose a cup of tea. Although only black tea was usually served at the gathering, coffee, his favorite beverage, was made available that day.

Hisashi drank tea, likely because he wanted to behave as usual at his last meeting.

He never complained about his pain and suffering to Sanae, but shared his discomfort with his close friends in Weisse. This was apparently because Hisashi did not want Sanae, who continued to work hard for the woodworking firm, to worry about his weakened condition.

In reply, Sanae told her husband, “All that should be done has already been finished, so do not worry about it.”

Shortly after their conversation, Hisashi lost consciousness and took his last breath the next morning.

Before he passed away, Hisashi would say he wanted “a gorgeous funeral to take place.”

According to his wishes, owners of NSX made the drive from Aichi, Gifu, Mie, Shizuoka and Shiga prefectures as well as elsewhere to attend the weekday service held two days after his death.

In preparation for the ritual, Wakana Ito, 40, a Weisse member, called on attendees through her blog to “gather in NSX cars even if the body color is red because going to his funeral in that fashion will never be inappropriate.”

With Hisashi’s NSX driven by Ito in the lead, the 14 vehicles traveled five kilometers from the funeral facility to the crematory. A hearse carrying Hisashi's coffin followed them.

The cloudy sky that morning had turned sunny by the time they started out at 1 p.m.

WHAT TO DO WITH THE NSX

Hisashi left no final wishes for the disposition of his NSX after his death. Sanae, however, did not even consider selling it so she began practicing driving and maintaining the vehicle.

While test-driving the difficult NSX, Sanae quickly realized she could not afford to feel sentimental or get caught up in memories. The only thing that came to mind was the anxiety she felt about hitting surrounding objects as she drove.

It was the first time in 30 years that she drove a manual transmission, which requires shifting the gears properly at the correct moment.

Learning of Sanae’s struggles, a Weisse member loaned her a minivehicle equipped with a manual transmission so she could practice with it.

Weisse members frequently organized tours, prompting Sanae to drive the NSX on many occasions. Thanks to that, Sanae became comfortably able to handle the sports car in about a month.

Getting the feel of the automobile, Sanae felt she “should have learned to drive the car sooner.”

As Hisashi loved cars but did not enjoy driving much, Sanae thought she could have driven the NSX so he could have enjoyed riding in the passenger seat.

In September this year, Ito shared a video showing the story of Hisashi and Sanae on Twitter and TikTok, drawing many responses from the viewers.

“Hisashi-kun loved to show off his car to others, so he must have appreciated that,” Sanae said. “But he may have regretted that it did not happen while he was alive.”

Sanae said what her spouse left her was not only his NSX but also Ito and other nice friends she could get to know through the car. She did not imagine she could make so many new friends at her age.