Wang doubles down on claim to Senkakus after Suga meeting 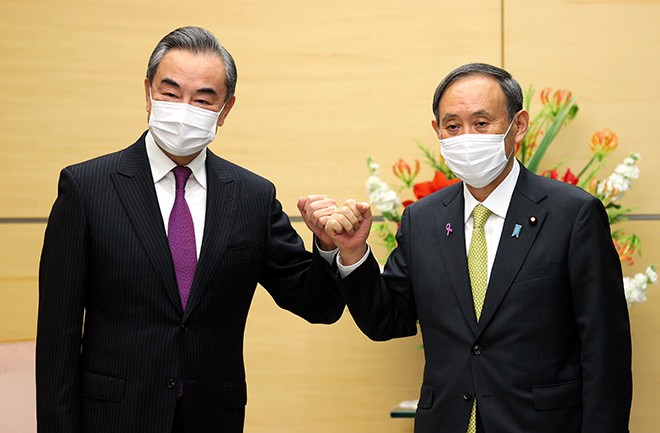 Suga began his first meeting with a top Chinese government official since becoming prime minister in September by saying: "A stable relationship between our two nations is important for the international community. I want to fulfill that responsibility together with the Chinese side."

Wang likewise verbally passed on a message from Chinese President Xi Jinping that touched upon the importance of having returned the Chinese-Japanese relationship back on a course of normalcy, according to a briefing by Chinese officials.

At the same time, Wang said, "It is also important to trust the other side and handle sensitive issues in an appropriate manner."

During the meeting, Suga called on Wang to take a proactive approach regarding the intrusion of Chinese ships into Japanese territorial waters near the Senkaku Islands in the East China Sea, according to government officials who briefed reporters.

Wang followed by bluntly addressing tensions over the Senkaku Islands after the meeting when he met with reporters.

“(Japanese) fishing ships are continuously entering sensitive waters. It is important to ensure that such ships do not enter those waters,” he said, openly addressing the countries' dispute over the rights to the Senkakus.

Wang made a similar comment during the joint news conference with Foreign Minister Toshimitsu Motegi the previous day.

Foreign Ministry press secretary Tomoyuki Yoshida denounced the comments at a Nov. 25 news conference, saying, “Wang’s comment is based on the unique standpoint of the Chinese side and is something that we absolutely cannot accept.”

Meanwhile, the Chinese Foreign Ministry in Beijing announced on Nov. 25 that the agreement reached the previous day between Wang and Motegi regarding travel of business people between the two nations would take effect from Nov. 30.

Also on Nov. 25, Wang had lunch with Toshihiro Nikai, the powerful secretary-general of the ruling Liberal Democratic Party, who has close ties with a number of Chinese officials.

During the meeting, Nikai asked that Beijing remove import restrictions against Japanese farm products, according to Japanese officials.

“It is important to improve public opinion toward the other side in both nations,” Wang said, according to Chinese government briefers, touching on Nikai's close ties with Beijing.

Nikai told Wang that the LDP would work toward stabilizing and developing the bilateral relationship.

No mention was made in the various meetings held by Wang about a possible state visit to Japan by Xi.

Such a visit had originally been scheduled for the spring, but the novel coronavirus pandemic led to its postponement.

Prior to his meeting with the prime minister, Wang had said, “Detailed discussions will not be held," in response to a question from The Asahi Shimbun. "There is a need for both sides to create the appropriate conditions and environment,” he added.

(This article was written by Ryutaro Abe in Tokyo and Takashi Funakoshi in Beijing.)