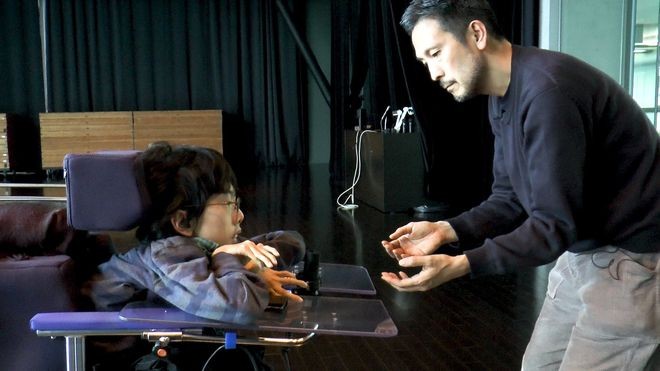 In his debut as a film director, Tomoya Ishida stole the show at an independent film festival, showing that disabled people can lead productive lives in the arts.

Ishida, 23, who works from a wheelchair himself due to muscular dystrophy, won the Grand Prize at the recent 42nd Pia Film Festival in Tokyo with his documentary film "Henshin!" (Transform).

The film features disabled people who have overcome difficulties to shine artistically.

“I was interested in how disabled people change their bodies and minds by participating in artistic activities,” Ishida said.

Festival judges, including film professionals, praised his work highly, saying, “I am just so excited about it.”

While Ishida took a video production seminar at Rikkyo University, he made this film as his graduation project.

In the documentary, he interviewed choreographer Osamu Jareo, who creates dances with disabled people, a blind actor who performs in theaters and others.

As Ishida continued to make his documentary, he became personally involved with the production and toward the end of the film, showed off his own dance moves.

Ishida became interested in visual expressions when he filmed with a tablet that he bought for his studies in his third year in junior high school.

He majored in body expression and cinematic arts at the university, and his academic supervisor was film director Makoto Shinozaki, who is known for his film “Okaeri” (Welcome home).

Ishida has been active in making short videos and TV commercial-like videos, but this was his first full-length film.

Acting on Shinozaki’s suggestion, he entered "Henshin!" in the 42nd Pia Film Festival, which seeks to find and nurture young filmmakers.

Ishida's film unexpectedly won a prize among 480 works entered. It was shown to audiences during the film festival's run in September.

That was followed by more unexpected good news.

His film captured the Grand Prize in the 2020 awards competition among 17 works in the film festival.

“I was able to feel his joy in making the film through the entire screen,” said Tatsushi Omori, one of the judges, who directed the film “Child of the Stars." “I loved this film at first sight and felt that I saw something that I have been longing to see for a long time.”

Ishida was impressed by the fact that his film was viewed by not only judges but also shown to audiences.

He said he received much feedback on the scenes where he held hands with other people featured in the film and showed off dancing with them in an impromptu fashion.

“I described some taboos among disabled people, but an audience member said, ‘I was able to understand them easily,’” Ishida said. “I was able to overcome the obstacles because I used artistic expressions.”

His production team basically consisted of Ishida as the director, a cameraman and an audio person. The team filmed about 100 hours of footage and it took about two years to complete the documentary.

Ishida said that he did not feel any extra difficulties as a filmmaker even though he has a disability.

His documentary film was also screened at the Tokyo International Film Festival, which began at the end of October.

“Audience feedback can enrich my studies,” he said. “I would like to continue to study artistic activities of disabled people.”