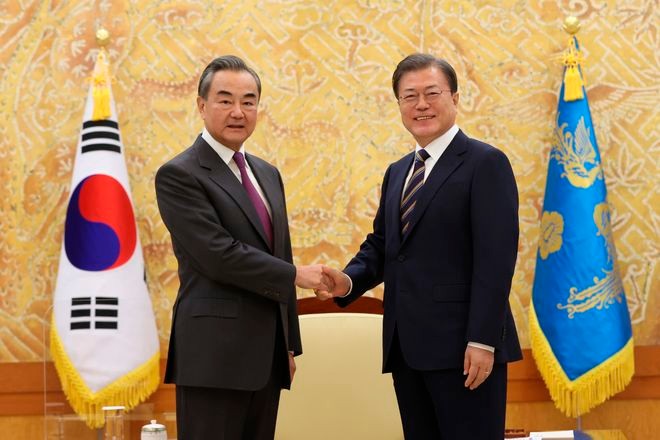 South Korean President Moon Jae-in, right, poses with Chinese Foreign Minister Wang Yi for a photo before a meeting at the presidential Blue House in Seoul on Nov. 26. (Yonhap via AP)

SEOUL--South Korea and China agreed on Thursday to prepare for a visit to South Korea by Chinese President Xi Jinping and to cooperate on stalled talks on North Korea's nuclear program and on tackling the novel coronavirus.

China's top diplomat, Wang Yi, arrived in the South Korean capital late on Wednesday, after a two-day visit to Japan, as Asian governments prepare for change under a new U.S. administration.

"Both sides agreed to actively communicate so that the COVID-19 situation stabilizes and conditions are created for President Xi's visit," the South Korean foreign ministry said in a statement after Wang held talks with South Korea's foreign minister, Kang Kyung-wha.

China and U.S. ally South Korea have traditionally been suspicious of each other but in recent years they have found common ground in economic cooperation and a shared concern about North Korea's rush to develop nuclear weapons.

Xi was expected to visit South Korea early this year but the coronavirus epidemic put plans on hold.

Wang said his visit was to highlight the importance of efforts by the "strategic partners" to work to promote peace and stability.

"The COVID-19 crisis could not defeat the citizens of our two countries," Wang, speaking through an interpreter, said as his meeting with Kang began.

"Bilateral ties are showing their strength and ever more vigor."

U.S. President Donald Trump raised hopes for progress in pressing North Korea to give up its weapons programs in exchange for the lifting of sanctions but talks with North Korean leader Kim Jong Un stalled.

Kang raised the issue of the incoming U.S. administration in her talks with Wang, who expressed "hopes" for its North Korea policy, a South Korean official who declined to be identified told reporters.

South Korea and the United States say the system is designed to counter North Korean missile threats but China fears it undercuts its security interests.