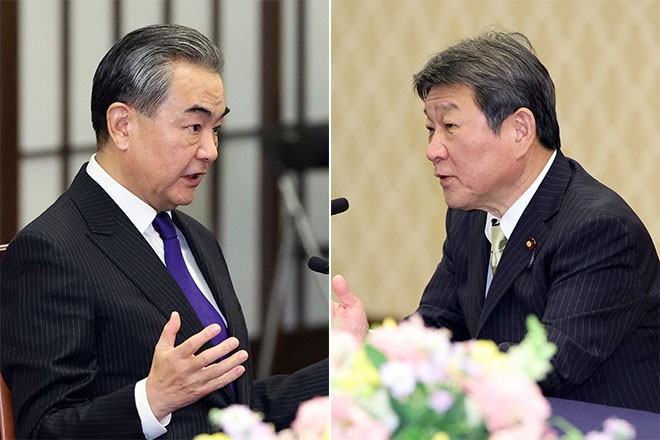 Building a healthy relationship with China is a priority for Japan that goes a long way toward determining the nation’s future course.

Japan needs to have more in-depth, candid discussions with China to create an environment that promotes peace and prosperity for both countries.

Chinese Foreign Minister Wang Yi visited Japan on Nov. 24-25 and held talks with Prime Minister Yoshihide Suga and Foreign Minister Toshimitsu Motegi. It was the first visit to Japan by a senior Chinese official since Suga took office in September.

During Wang’s stay in Japan, the two countries agreed to reopen their borders for business travel this month. They will also cooperate in efforts to combat the novel coronavirus and expand communications over the issue of climate change.

The Chinese government pressed for Wang’s visit to Japan at this time. It appeared that Beijing wanted to work closely with Japan before the change of administration in the United States. It also gave an opportunity for the Suga administration to show that he has a steady diplomatic hand.

But the outlook of the U.S.-China confrontation, which has made the international community uneasy, remains unclear. Unlike U.S. President Donald Trump, President-elect Joe Biden is expected to take a moderate diplomatic stance. But it remains unknown how Biden will deal with China.

Tokyo needs to map out and execute its own strategies for stabilizing Japan’s ties with China, South Korea and other countries while monitoring how the new U.S. administration shapes its policy.

China is Japan’s largest trading partner. The agreement to reopen business travel is aimed at stressing the mutually beneficial nature of their relationship. But Japan should not soften its demand that China sufficiently discloses information concerning the novel coronavirus.

This month, 15 East Asian and Pacific countries, including Japan and China, signed a trade pact called the Regional Comprehensive Economic Partnership (RCEP). While the accord will not eliminate trade barriers to a satisfactory extent, the deal will help Tokyo and Beijing expand the scope of cooperation in promoting free trade.

Japan, for its part, should call on China to open up its market further and apply fair rules to trade issues while trying to persuade the United States, its ally, to return to the principle of free trade.

There are, however, still many issues where Japan needs to take a stern approach toward China.

Japanese officials who met Wang this week voiced concerns about the frequent intrusions of Chinese ships into Japanese territorial waters near the Senkaku Islands in the East China Sea.

Chinese government vessels have been engaged in active operations in this region, which are also raising tensions with neighboring countries in the South China Sea.

No attempt is unacceptable to change the status quo by force, no matter where it is made. Japan should keep demanding that China respect the rule of law without mincing words.

Beijing has repeatedly taken high-handed actions in Hong Kong that would destroy the “one country, two systems” principle. There have also been reports about China’s serious violations of the human rights of Uighur people in Xinjiang and other ethnic minorities.

The Japanese government has been considering a state visit to Japan by Chinese President Xi Jinping. Unfortunately, however, the current situation makes it difficult for the Japanese people to welcome Xi with open arms.

Japanese public opinion is deeply critical of China’s actions that threaten the safety of Japan and other neighbors and violate human rights. The Suga administration should keep making tenacious efforts to bring home this reality to Beijing.