Xi visit on hold, probably until 2022 when key anniversary held 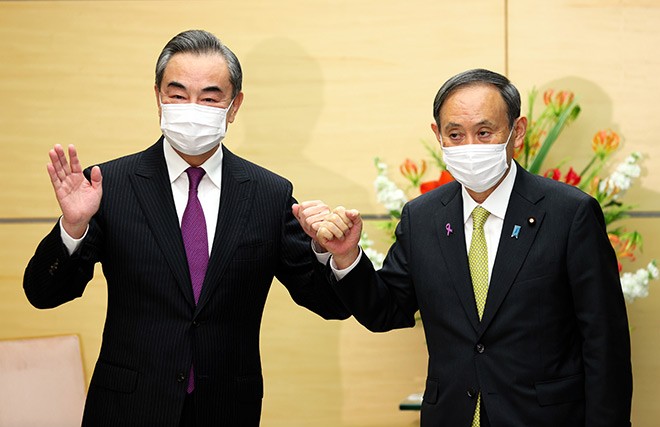 It did, however, result in a minor breakthrough: the lifting of travel curbs for businessman of the two Asian powers despite a surge in new COVID-19 cases in Japan, a development that one Foreign Ministry source trumpeted as a diplomatic victory.

But overall, there seemed to be little enthusiasm for an early visit to Japan by Xi.

He was initially scheduled to come in April, but the visit was postponed because of the global health crisis. Further discussion appears unlikely, for the time being at least, as the topic was not raised during Wang's round of meetings with government officials over two days from Nov. 24.

From Japan's viewpoint, Wang’s comments about the disputed Senkaku Islands in the East China Sea were simply unacceptable.

During a news conference, Wang referred to “repeated intrusions by unidentified Japanese fishing vessels in sensitive waters near the Diaoyu Islands,” the Chinese name for the Senkakus that lie west of the main Okinawa island in Okinawa Prefecture.

His remark echoed the precise view the Japanese government takes on incursions in those waters by Chinese vessels.

Conservative elements in the ruling Liberal Democratic Party were left unimpressed. An LDP committee session held Nov. 26 was far from a cordial affair as participants seized on the government for not forcefully countering Wang's comments about the Senkakus.

Some within the government now envisage Xi making a state visit in 2022, which will mark the 50th anniversary of normalization of Japan's diplomatic ties with China.

Because Wang was the first high-ranking Chinese government official to visit Japan since Yoshihide Suga took over as prime minister in September, Foreign Ministry officials were determined that some agreement be reached to mark the occasion.

In a meeting Nov. 24 with Foreign Minister Toshimitsu Motegi, Wang agreed to resume business travel between the two nations.

China had initially been hesitant about doing so in light of a sharp increase in COVID-19 cases in Japan.

A Foreign Ministry source called it a significant diplomatic victory and Motegi was clearly pleased with the development during the joint news conference he held with Wang after their meeting.

A survey in autumn by a nonprofit organization of public opinion in both nations found that Japanese sentiment had worsened for the first time in four years. Close to 90 percent of Japanese respondents said they held an “unfavorable” impression toward China.

Japan first issued an invitation to Xi to make a state visit in June 2019 when Shinzo Abe was prime minister. But even before the postponement was announced, some within the LDP were fiercely opposed to it, mainly on grounds of growing intrusions around the uninhabited Senkakus by Chinese government ships.

With that as background, government officials said they had not reached the point of being able to coordinate a specific itinerary for a visit by Xi.

According to government sources, no mention was made of a possible state visit even when only interpreters were present in the meeting room with Motegi and Wang.

“It will not happen next year,” a high-ranking official in the Suga administration said. “The year after may be appropriate since that will be the 50th anniversary of normalizing diplomatic ties.”

Suga has been championing strengthened economic ties with China and made no secret of his expectations for a state visit by Xi. But unlike Abe, Suga does not have a strong support base among conservative elements and must remain sensitive to opposition voiced within the LDP.

Another factor that could set the stage for a state visit is if he establishes a solid grasp of government by winning a Lower House election after the chamber is dissolved.

(This article was written by Ryutaro Abe and Yuki Nikaido.)