2nd round of antibody testing to be expanded nationally 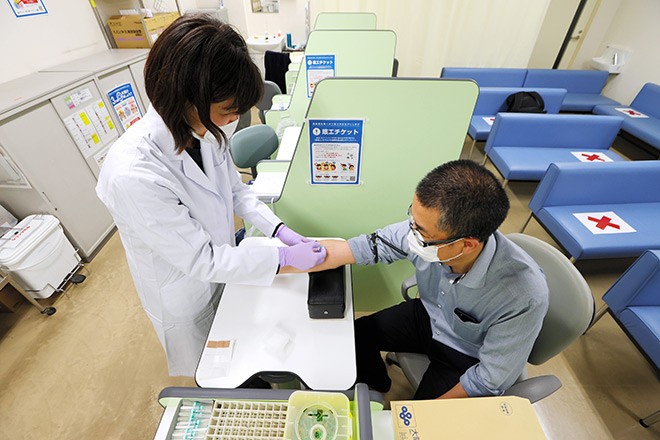 A demonstration is conducted of an antibody test to determine if a subject had been infected with the novel coronavirus in the past. The photo was taken in Osaka in June. (Asahi Shimbun file photo)

The government plans a second round of antibody testing for past infections of the novel coronavirus in five heavily populated areas, expanding the first round of testing conducted in June.

Health minister Norihisa Tamura announced on Nov. 27 that approximately 15,000 tests will be conducted by year-end.

The first national antibody tests were conducted in Tokyo and Osaka and Miyagi prefectures in June. Those areas will be included in the second round of testing along with Aichi and Fukuoka prefectures.

The antibody test measures proteins that can be created in the body following infections, or antibodies.

The test is not suitable for a current determination of infection but can ascertain whether a subject has been infected in the past.

The government hopes to determine how widely the infection has spread in Japan and how much of the population obtained immunity.

It plans to test 3,000 people in each prefecture for residents aged 20 or older, who will be chosen at random.

It added Aichi and Fukuoka prefectures because COVID-19 cases are surging there.

In June, the first test was conducted among populous prefectures. Tokyo and Osaka Prefecture were chosen because of their higher number of cases while Miyagi Prefecture was selected due to its lower number.

The government conducted the test with measurement methods of two makers for roughly 8,000 residents in Tokyo and two other prefectures. The subjects in Tokyo tested positive for past infection at a rate of 0.10 percent while Osaka Prefecture tested at 0.17 percent and Miyagi Prefecture at 0.03 percent.

At that time, the positivity rate of the antibody tests were 12 percent in New York state and 5 percent in Spain.