A group of Vietnamese stay at the Daionji temple in Honjo, Saitama Prefecture. Most came to Japan as a technical trainee or a student, lost their jobs due to the novel coronavirus pandemic and have found a shelter with the temple near Gunma Prefecture. (Hikaru Uchida) 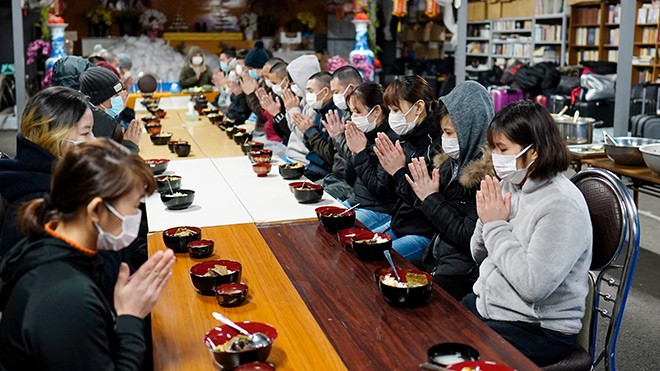 A group of Vietnamese nationals dine together at Daionji temple in Honjo, Saitama Prefecture, on Nov. 4. (Hikaru Uchida)

About 40 Vietnamese nationals have taken shelter at the temple in Honjo in northern Saitama Prefecture, counting on the support of Vietnamese nun Thich Tam Tri.

The temple, in the mountains near the borders of Gunma and Saitama prefectures, has served as a haven for Vietnamese who have lost their jobs and been unable to return to their country due to the novel coronavirus pandemic.

Tri, 42, who heads the Vietnamese Buddhist Association in Japan, has been based in the temple since spring.

She has taken in Vietnamese who came to Japan as technical trainees or students, as well as those who have overstayed their visas.

For Nhat, 28, the temple was his last and only hope.

He came to Japan in 2016 as a technical trainee. His job was to build a vinyl greenhouse in Kumamoto Prefecture.

Nhat worked 10 hours a day and never received any overtime.

“It was so hard that I started hating Japanese people,” Nhat recalled.

He was forced to live with two other people in a container placed in the middle of a rice paddy.

He had to take a shower outside. Inside the container, he had to endure freezing cold winds that penetrated the walls. The employer took 20,000 yen out of his monthly pay as rent.

He had a hard time understanding local dialects at work. When he asked what was said, he was cursed and kicked.

After a year, Nhat ran away. He found a welding job in Saitama Prefecture through a website that offered information for Vietnamese runaways in similar predicaments.

The Japanese he met at the new job were nice to him.

“Now I love Japan. I really want to stay here and keep working,” he thought.

But the COVID-19 pandemic shattered his hopes. He lost his job and was later arrested for overstaying his visa.

He was released temporarily, only to find that he had no place to stay. He reached out to the Vietnamese Embassy in Japan, asking for help. The embassy told him about the temple.

Nhat began living with other Vietnamese at the temple in late October.

He considers himself “lucky,” because he had already repaid his debt and sent his parents some money.

“I’ve got some money from my parents. But technical trainees who have come to Japan recently are still in debt and suffering,” he said.

MANY TALES OF WOE

One such unfortunate trainee is Ngoc Van Loi, 33, who came to Japan in July 2019. Loi got a plastering job at a company in Yokohama.

At work, he said he was kicked, hit with a hammer and told to, “Die!” and "Go back to Vietnam!"

Three of the six technical trainees at the company quit. But Loi managed to survive all the abuse.

Then he was fired in September.

He slept at a train station, ate only one meal a day, which consisted of a 110-yen cup of instant noodles.

When he arrived at the temple, he thought, “Thankfully, I have a place to sleep.”

Since April this year, when the pandemic started raging in Japan, Tri has rescued about 300 Vietnamese and taken them in at Daionji and four other locations including Chiba Prefecture and Tokyo.

She has asked them to write about what had occurred to them and keeps these handwritten notes in 10 files.

A note written by a 29-year-old man reads, “I lost my job because of the coronavirus. I suffered from depression and attempted suicide. Please help!”

His friend found the man lying with a knife stuck in his chest. He survived the wound and has been placed in a shelter. But he has suffered from mental instability, drawing comfort from fellow Vietnamese.

Another note was written by a woman who was five months' pregnant: “I have no money. I will do anything. Please help me.”

An ultrasound image of her fetus was attached to the note.

According to the Vietnamese Embassy, 46 chartered flights have been flown from Japan to Vietnam through Nov. 26. But regularly scheduled flights, which are much more affordable, have not resumed yet.

About 20,000 Vietnamese remain stranded in Japan, waiting to return home, the embassy said.

The saga of Vietnamese who have come to Japan on the government’s controversial technical trainee program has garnered renewed attention after the recent arrests of Vietnamese nationals by the Gunma and Saitama prefectural police.

Police arrested about 20 Vietnamese, including former technical trainees since October on suspicion of illegally dismembering pigs to eat and overstaying visas among other charges. Charges have been dropped in some of the cases.

Tri has been distressed by the highly publicized incidents.

“Committing a crime is not acceptable. But there are many (Vietnamese) who don’t have anything to eat and are in need,” she said.

“I want the Japanese government to help them.”

The number of Vietnamese living in Japan has rapidly increased over recent years on the back of Japan’s chronic manpower shortages.

There are about 80,000 Vietnamese students in Japan, trailing Chinese students, the largest group, who number about 140,000.

According to the Justice Ministry, approximately 32,000 technical trainees "disappeared" from their employees during the five-year period until 2018. The Vietnamese is the largest, accounting for 45 percent, or about 14,000 of the runaways.