Uphill battle for Tokyo, Osaka hospitals due to COVID-19 surge 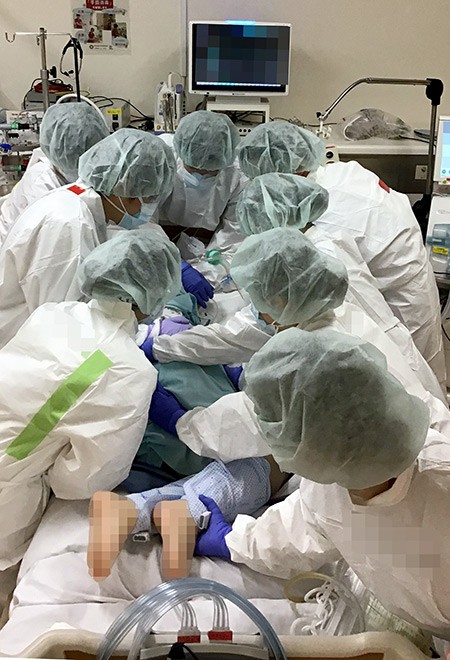 Hospital beds for COVID-19 patients with severe symptoms are filling up so fast in Tokyo and Osaka that health care professionals fear they may soon be unable to treat others with different health issues in need of immediate treatment.

They cited patients with aggressive forms of cancer and those requiring emergency operations.

Health ministry statistics show there were 435 COVID-19 patients with severe symptoms as of Nov. 26, almost doubling over a two-week period.

The Asahi Shimbun ascertained that 52 percent of beds in Osaka set aside for those with severe COVID-19 symptoms were filled while 40 percent of Tokyo beds were occupied as of Nov. 26. The figure for other major prefectures was 32 percent for Kanagawa Prefecture, just west of Tokyo, 31 percent for Aichi Prefecture, where Nagoya is located, and 29 percent for Hyogo Prefecture, which borders Osaka.

All five prefectures have figures that exceed the benchmark of more than 25 percent set by the government’s panel of experts in determining if a region is at the second highest stage 3 defined as a period when novel coronavirus cases are rising rapidly.

Experts warned the situation may be more perilous than the figures suggest.

The Tokyo metropolitan government defines patients with severe symptoms as those requiring use of a ventilator or an extracorporeal membrane oxygenation (ECMO) device, which circulates blood through an artificial lung.

Tokyo had 60 patients with severe symptoms as of Nov. 26. The metropolitan government said it had “secured” 150 hospital beds for those with severe symptoms, but that does not mean the beds are free to be used immediately. Operating an ECMO device requires doctors and nurses with special training but not all hospitals with one have adequate staff to handle the equipment.

Yoshihiro Yamaguchi, head of the Trauma and Critical Care Center of Kyorin University Hospital in Tokyo who is involved with the Tokyo metropolitan government in coordinating the preparation of hospital beds for those with severe symptoms, said only half of the beds secured so far can be used.

“There are almost no beds now that can take in new patients with severe symptoms,” Yamaguchi said.

Preparing hospital beds in such cases entails moving patients to other wards. With more hospital staff devoted to treating those with severe symptoms, some hospitals have been forced to perform fewer surgical operations or accept fewer patients for emergency treatment.

In the first wave of COVID-19 infections in spring, hospitals that sharply scaled back surgeries and emergency room patients for serious COVID-19 cases found themselves facing financial difficulties.

That, along with the risk of infections spreading within their facilities, led many hospitals to hesitate arranging beds for COVID-19 patients.

Local authorities in Tokyo and Osaka are taking steps to deal with the increase in cases with severe symptoms, but the process is a gradual one.

The Tokyo metropolitan government plans to open a facility for COVID-19 patients on Dec. 16  at what was formerly the Tokyo Metropolitan Fuchu Medical Center in western Tokyo.

While the facility will only be capable of treating patients with less severe symptoms, authorities hope that other hospitals can transfer those with only medium symptoms to the Fuchu facility to reduce their burden.

The Osaka prefectural government also plans to open a facility for those with severe symptoms within the grounds of the Osaka General Medical Center in Osaka city from mid- to late December.

But the medical center is having difficulty securing the needed equipment and staff. It needs to hire 120 or so specially trained nurses, but so far has only managed to recruit about 40. The initial plan was to operate about 30 beds, but hospital officials say they initially may be only able to handle a handful of patients with severe symptoms.

Osaka City Juso Hospital is planning to increase the number of beds set aside for those with medium symptoms from about 60 to 90 to lessen the burden on facilities caring for patients with severe symptoms.

These and other measures need to be implemented soon because Osaka prefectural authorities estimate that if the pace of increase in severe cases continues unabated, a shortage of beds for such patients will become apparent Dec. 10.