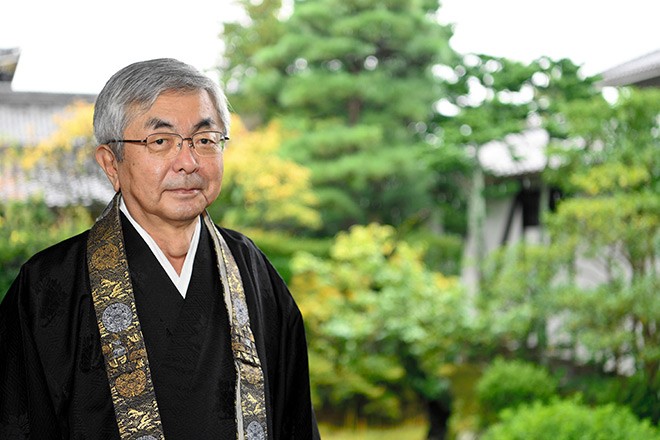 Choyu Otani, 69, has been appointed as the 26th “monshu” (abbot) of the Otani branch of the Jodo Shinshu Buddhism sect. (Kenta Sujino)

KYOTO--Choyu Otani is not what you might picture as a typical Buddhist monk.

The 69-year-old worked for much of his life as a scientist in Brazil after getting a doctorate in physics in Sao Paulo.

In his spare time, he cooks mouthwatering churrasco--Brazilian barbecued meats cooked on skewers. After five years in Japan, he has gotten used to sitting in “seiza” style on his heels.

The Japanese-born Brazilian national is putting his life experiences to use in teaching Buddhism and bridging cultural divides.

He is determined to learn the teachings of the 13th-century Buddhist monk Shinran, the founder of the Jodo Shinshu sect, with other followers and promote the Buddhist sutra around the world.

“Jodo Shinshu teaches us about a world in which we are equal regardless of nationality, race, gender or age,” he said.

“Even if there are many different languages, cultures and foods, I want to deliver the sutra ‘Namu Amida Butsu’ (I take refuge in Amida Buddha) across the world.”

Otani returned to Japan to lead a large religious community with about 8,700 affiliated temples and 7.5 million followers at home and abroad.

In July, Otani became the first Brazilian to head up the Jodo Shinshu sect’s Otani branch, headquartered at Higashi-Honganji temple in Kyoto, when he was appointed as its 26th “monshu” (abbot).

Otani on Nov. 20 attended the succession ceremony at the temple, where he expressed his determination in Japanese, English and Portuguese.

“When we turn our eyes to the present world at hand, it is evident that there is nothing more essential for us human beings other than to realize a world where all beings can live together in true harmony,” he said. “It requires mutual respect beyond differences of nationality, ethnicity, language and culture.”

Otani was born to a Japanese couple in Kyoto. When he was only 1 year old, he went to Brazil with his father, who was an Otani branch missionary to South America.

He obtained Brazilian nationality and grew up there. He fell in love with a woman from a choral group and not after long they married.

Otani had spent much of his life in Brazil as a scientist. He obtained his Ph.D. in physics at the University of Sao Paulo. He developed carbon materials used for rockets and garbage-disposal technology using plasma.

Otani became a priest at the age of 40 at the behest of his father.

His life’s direction made a major change in 2014, when he was chosen as the successor to monshu.

The succession is hereditary, in principle, but he was named heir because the former monshu has no children and Otani is his cousin. He decided to accept the request after the branch's members promised to give him their full support.

“Science is important in making people's lives comfortable, but I think it is the religious mind that supports the lives of people who use it,” Otani said.