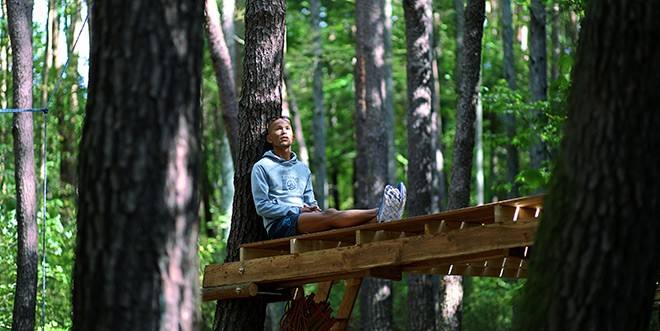 Kazuya Hiraide poses on a tree deck he built in a forest owned by his father near the family home in Fujimi, Nagano Prefecture. He said his habit of leaning against a tree trunk on the deck helps him to refresh his mind when he is back home. (Yasuhiro Sugimoto)

When he’s not putting himself in danger by scaling the world’s highest peaks, Kazuya Hiraide often leans against a tree trunk in Nagano Prefecture to collect his thoughts.

He has a lot on his mind these days.

After losing his longtime climbing partner in an accident in Hokkaido in 2015, Hiraide is now plotting to conquer K2, the world’s second highest peak, by a new route up the west face with a new partner.

The 41-year-old intends to ascend the 8,611-meter peak on the border between Pakistan and China, the highest mountain in the Karakoram Range, without an oxygen cylinder, which is extremely hazardous.

It will be a formidable challenge even for Hiraide who became the first Japanese to receive a third “Piolet d’Or” (golden ice axe) award, often called the equivalent of an Academy Award, in August after scaling 7,788-meter Mount Rakaposhi in Pakistan in 2019.

Hiraide’s specialty is conquering Himalayan peaks by difficult routes, where rocks, snow and ice pose obstacles. His alpine style is to scale a mountain face only with one colleague without setting a fixed rope.

He also wears the hat of mountain photographer.

Hiraide’s video footage captures not just the joys of an ascent to the summit. He has even documented the moment of an accidental fall of his climbing partner on the other end of a single rope.

He also makes extensive use of a drone to present magnificent views to audiences.

As a university student, Hiraide lost his passion for racewalking, which he had been doing since he was in high school, and switched membership to a mountaineering club in the autumn of his sophomore year.

“I came to question the way I was chasing the backs of others,” he said.

In the spring of his senior year, Hiraide was part of his alma mater’s expedition party that accomplished the first ascent of a 7,000-meter-plus peak in Tibet.

“The Himalayas became a place where I can come into my own,” he said.

Hiraide finds affinity with peaks and routes that have been left unconquered.

When he visited the Karakoram Range in northern Pakistan in 2002, Hiraide carried a copy of a map inscribed with peaks and routes that had been conquered by past expeditions.

“I want to see with my own eyes what lies in the gaps in the map,” he thought at the time.

After roaming the area, Hiraide set his sights on conquering a new route to 7,027-meter Mount Spantik, also known as the Golden Peak.

Hiraide approached skillful climbers in search of a potential partner. Kei Taniguchi, a female alpinist who was practically unknown at the time, came forward.

In 2004, the pair became the first to scale the northwest ridge of Mount Spantik.

Taniguchi turned out to be a superb climbing partner with a heightened sense of the danger of falling rocks and avalanches and an ability to find the best route up. The Spantik expedition was the starting point of the pair’s decade-long partnership.

Young climbers emerging at the time formed small parties of like-minded people to challenge difficult routes rather than joining tried-and-tested organized expeditions by university students or adults to the Himalayas.

Hiraide and Taniguchi, among other up-and-coming climbers, achieved impressive results during their partnership.

In 2008, they became the first to scale the southeast face of India’s 7,756-meter-high Mount Kamet, an achievement that earned them a Piolet d’Or, one of the first for Japanese climbers.

Taniguchi was killed in Hokkaido’s Taisetsuzan mountain area in 2015 when she slipped while taking a break.

Left alone without his most trusted partner, Hiraide paired up with Kenro Nakajima, 36, as his new partner.

“I have to go on climbing, not the least to accept Kei’s death,” he thought at the time.

His last climb with Taniguchi was in 2013 to 7,611-meter-high Mount Shispare in the Karakoram Range.

In 2017, he climbed the mountain for a fourth time, pairing with Nakajima, and made it to the summit by a new route. The pair was awarded the Piolet d’Or, Hiraide’s second, for the accomplishment.

Hiraide buried a portrait of a smiling Taniguchi in the snow at the summit.

In July 2019, he stood atop Mount Rakaposhi, also in the Karakoram Range, with Nakajima, after opening a new route on its south face.

Talking about his latest goal of conquering K2 by a new route, Hiraide said he felt overwhelmed by the compelling power of the mountain when he went on a reconnaissance tour with Nakajima in summer 2018.

“A number of adventurists have said an enterprise is no longer an adventure when it has more than a 50-percent chance of success,” Hiraide said. “We only have slim chance of accomplishing what we want to do, but it is still attractive enough for us to take on.”