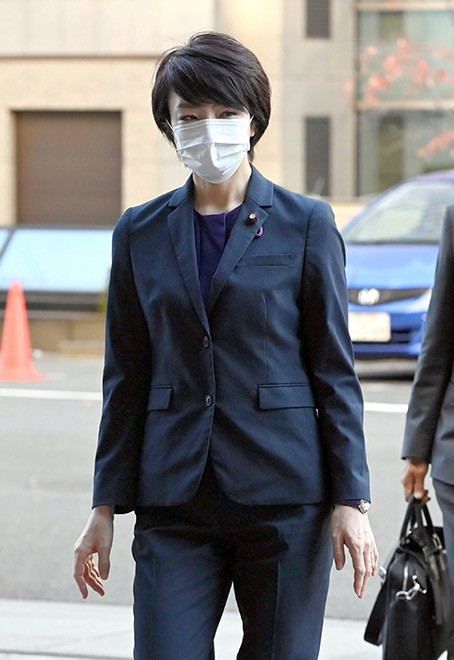 Anri Kawai, an Upper House member, enters the Tokyo District Court for her trial on Nov. 11, her first appearance after she was released on bail. (Pool)

Rookie Upper House member Anri Kawai will likely forfeit her Diet seat after the nation’s top court dismissed the appeal of her top aide who was convicted of a vote-buying charge in her campaign.

The Supreme Court’s rejection, dated Nov. 25, finalized the rulings by lower courts that found Hiroshi Tatemichi, a government-paid aide to Kawai, guilty of exceeding the legal limit in payments made to her election campaign staff.

As the accused’s suspended prison term was finalized, prosecutors can now file a lawsuit to invalidate Kawai’s election victory based on the application of guilt by association under the Public Offices Election Law.

The Hiroshima High Public Prosecutors Office is expected to file such a lawsuit at the Hiroshima High Court soon. Such a suit must be filed within 30 days after the top court decision. The high court will hand down a ruling within 100 days in an expedited process.

Tatemichi paid 30,000 yen ($286) per person a day to 14 staff members who rode in campaign cars and shouted the name of Kawai during the Upper House election in the Hiroshima electoral district in July 2019. The amount is twice the legal limit and totaled 2.04 million yen altogether.

Hiroshima prosecutors contend that Tatemichi managed Kawai’s campaign. If their assertion is acknowledged by the court, Kawai, 47, will be prohibited from running in the same constituency for five years, in addition to losing her Upper House seat.

Kawai and her husband, Katsuyuki Kawai, 57, a member of the Lower House and former justice minister, are being tried separately on another vote-buying charges at the Tokyo District Court in connection with her campaign.

Anri’s trial is expected to close by the end of December, with a ruling to be handed down in early January.

If the Hiroshima High Court rules that guilt by association should be applied, Anri’s election win will be nullified, regardless of the outcome of her trial at the Tokyo District Court.