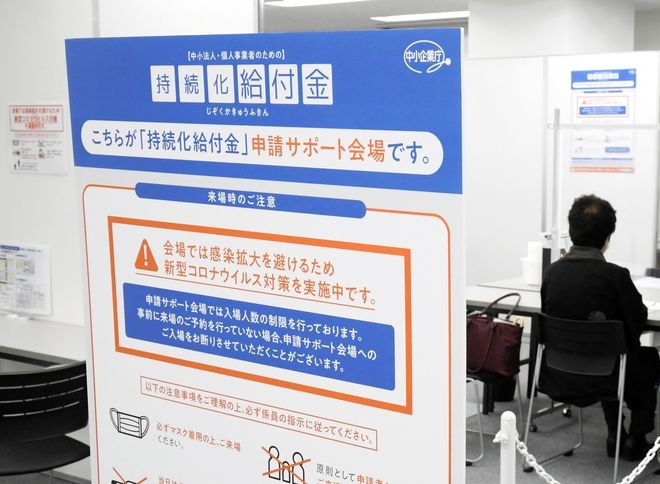 A number of unexplained factors are hurting the reliability of government statistics, which is manifesting itself in gross underestimation of relief payments during the COVID-19 pandemic.

The number of payments has grown unaccountably large under the government’s Subsidy Program for Sustaining Businesses, which is paying up to 2 million yen ($19,200) in relief aid to small and midsize enterprises and sole proprietors that have seen a sharp drop in income.

The Small and Medium Enterprise Agency says there are a total of 3.58 million SMEs and sole proprietors combined in Japan. That figure has been derived from the government’s Economic Census, an exhaustive survey of all businesses and offices in the country by parties including the internal affairs ministry.

The Sustainability Subsidy, as the relief money under the program is called, is available on condition that the recipient’s monthly income fell by one-half or more year on year in any one month of this year because of the coronavirus pandemic.

A survey by Tokyo Shoko Research Ltd. shows the ratio of SMEs whose monthly income dropped by one-half or more year on year peaked at only 20 percent in May.

The subsidy is receivable only once. The SME Agency initially estimated there would be 1.5 million to 2 million payments and set aside a corresponding budget.

As of Nov. 23, however, there had already been 4 million applications for the subsidy, with payments completed in 3.8 million of the cases, well in excess of the purported number of all SMEs and sole proprietors in the nation. The number of cases is certain to grow further, because applications will be accepted until January next year.

The unanticipated development has obliged the budget to be increased on three occasions to 5.5 trillion yen, on par with Japan’s annual defense budget. The government should make clear what has caused the budget to snowball to such an extent.

The first thing that comes to mind as a possible cause is the fact that the SME Agency statistics do not include farms, forestry businesses and fisheries, which are also eligible for the subsidy. Farm ministry figures show there are slightly more than 1.3 million of them in Japan.

Even with the farms, forestry businesses and fisheries included, however, the SMEs and individual business owners that have received the relief money would still account for nearly 80 percent of the total number, a proportion that could only be described as being unnaturally high.

Those who have received the subsidy illegally are also partially to blame. Authorities are taking action against similar cases across Japan. The SME Agency alone has received 9,000 offers to voluntarily return relief payments.

The subsidy program was designed with a lax screening process for documented evidence, including of income, to put the foremost priority on speedy payments. The government should persistently continue with efforts to disclose cases of fraudulent receipt.

These considerations, however, are not enough to dispel all questions. Informed officials believe the low accuracy of the number of businesses and offices in the Economic Census is another big factor behind the miscalculation.

The census involves an on-site survey of business offices. Census investigators, however, have no way of locating an existing office unless it has put up a signboard or a doorplate.

The Economic Census is used to estimate Japan’s gross domestic product. Large omissions in the census could cause the scale of the country’s economy to appear smaller in statistics than in reality.

The internal affairs ministry has worked with the National Tax Agency to try to correct the census omissions. But the pandemic has prompted a spread of new working styles, as exemplified by an increase in “gig workers,” who undertake food delivery and other one-off contracts online, and those who work side jobs.

The census method should be reviewed incessantly in line with societal changes to enable an accurate grasp of the reality.