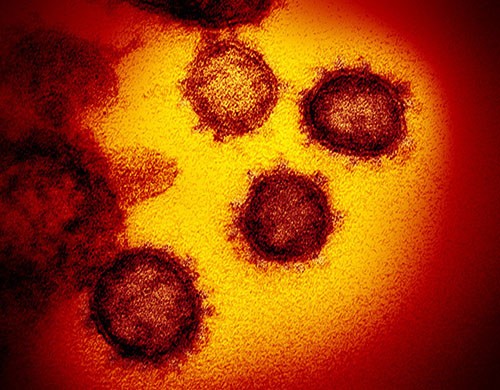 An electron microscope image of the novel coronavirus (Provided by the U.S. National Institute of Allergy and Infectious Diseases)

Japan reported 2,066 new novel coronavirus infections on Nov. 29 as of 11 p.m. and had confirmed a record 462 serious cases as of the previous day, the health ministry reported.

The latest daily number of new COVID-19 cases topped 2,000 for the fourth consecutive day, while the figure for patients with serious symptoms rose by 22 from Nov. 27, setting a record for the seventh straight day.

A total of 16 virus-related deaths were reported in Hokkaido, Osaka and four other prefectures on Nov. 29.

Of the 2,066 new cases, 418, the highest in the nation, were confirmed in Tokyo, exceeding 400 for the fifth consecutive day.

The accumulated total of infections reached 20,000 in Osaka and 10,000 in Aichi Prefecture.

In Tokyo, the number of patients meeting the capital's definition of serious cases--requiring ventilators or extracorporeal membrane oxygenation (ECMO) devices--remained unchanged from the day before, at 67 on Nov. 29.

The figure marked the highest since a state of emergency was lifted for Tokyo over the pandemic in late May.

Aichi began asking some restaurants in Nagoya’s entertainment districts to cut their operating hours or close temporarily from Nov. 29.

The request mainly targets "snack" bars and other establishments where staff members entertain customers, as well as karaoke parlors that serve alcohol.

"Izakaya" pubs, “yakiniku” barbecue restaurants and other establishments not covered in the request are also being asked to close by 9 p.m.