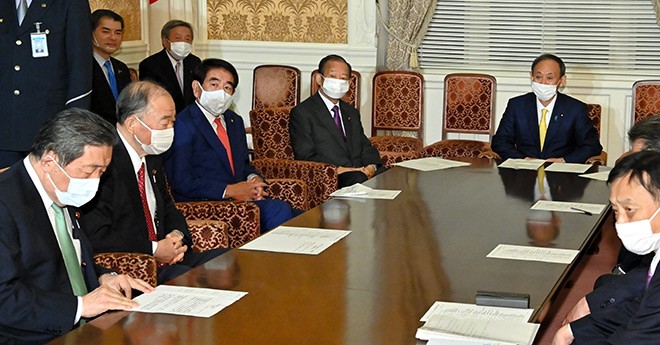 The Suga administration plans to open the next ordinary Diet session on Jan. 18, which will likely push back the Lower House’s dissolution and dampen speculation on an early election, according to senior officials of the government and ruling parties.

The move comes as the prime minister plans to put anti-coronavirus measures front and center for the time being as the virus resurges, they said.

The coming legislative agenda includes passing the third supplementary budget, which will include additional aid measures to help the economy recover from the pandemic. That could happen as early as the end of January.

The government and ruling parties were initially considering opening the Diet session in early January, which would keep the options open. By convening earlier, a January dissolution would still be possible after the third supplementary budget is passed.

But with COVID-19 cases soaring across Japan, the budget will need additional measures, pushing back the start of the Diet session. A senior official of the ruling parties said they may still move up the opening date by a few days.

If the Lower House is not dissolved in January, that will push the dissolution date a ways down the calendar. The other options include April after the budget for fiscal 2021 is passed and even as late as September, right after the Tokyo Olympics and Paralympics.

The government is expected to soon approve additional economic aid measures. That could happen as soon as Dec. 8 when the Cabinet meets.

Prime Minister Yoshihide Suga has indicated he plans to pass a supplementary budget to fund the new aid measures earlier.

He plans to formulate it on a 15-month budget cycle and combine it with the initial budget for fiscal 2021.

The current term for Lower House lawmakers is set to end next October. But an increasing number of LDP lawmakers believe it would be impossible to dissolve the Lower House in January because of how the pandemic is developing, along with various considerations over the next ordinary Diet session.

He told them that he wants to hammer out more anti-coronavirus measures if needed, they said.

Suga’s term as party president will end next September.