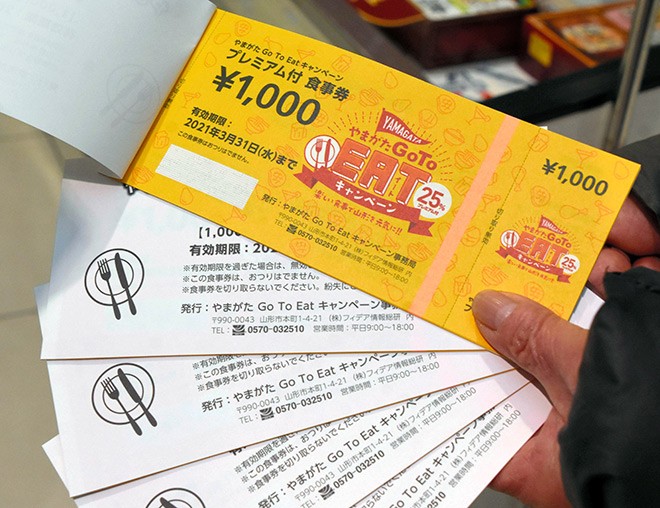 Premium meal coupons for the Go To Eat government-subsidized campaign in Yamagata on Nov. 26 (Masato Nishida)

Two Tokyo restaurants tried to illicitly obtain reward points from the Go To Eat campaign by faking reservations for their own eateries and pretending that customers showed up and ate there, government officials said.

Operators of restaurant reservation websites discovered the acts and withheld the points from the restaurants, according to the Ministry of Agriculture, Forestry and Fisheries. Their memberships in the government-subsidized campaign were terminated.

“We are consulting with the police about our response,” a ministry official said.

One of the restaurants attempted to obtain more than 1 million yen ($9,580) in reward points through the scam, the ministry said.

The Go To Eat campaign, which is now winding down, is intended to support eating and drinking establishments that have been hit hard by the COVID-19 pandemic.

Under the program, users who make online reservations for eligible establishments can receive reward points equaling 500 yen for lunch or 1,000 yen for dinner.

Group reservations for up to 10 people are allowed under the campaign rules, and they can receive 10,000 yen in reward points.

According to the ministry, the two restaurants repeatedly made fake reservations to their own eateries in October when the reward point system started.

Reward points are not given to customers unless restaurant staff confirm their arrivals. The ministry suspects the restaurant owners, staff or associates pretended to be the customers to collect the points.