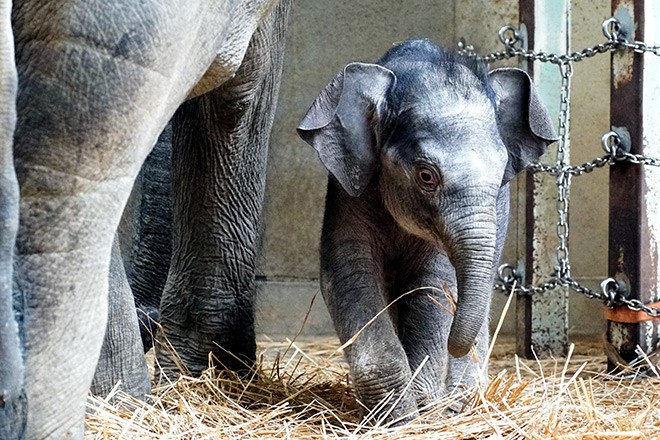 The Asian elephant calf born at Ueno Zoological Gardens was about a month old when this photo was taken. (Provided by Tokyo Zoological Park Society)

The first Asian elephant born at Tokyo's Ueno zoo in its 138-year history was finally put on show to visitors Dec. 1, and officials said mother and calf are doing well.

It stands about 1 meter high at the shoulder and already weighs 120.5 kilograms. The zoo is now holding a vote to choose a name for the calf from among three choices.

Its mother Uthai and father Arthit were presented to the zoo in 2002 by Thailand to commemorate the birth of Princess Aiko, the only child of Emperor Naruhito and Empress Masako.

According to the zoo, Uthai was confirmed to be pregnant four years ago, but miscarried. In light of that, zookeepers took special precautions when they realized that Uthai was expecting again and carefully monitored her progress from late October to ensure a safe delivery.

Although the calf was able to stand almost as soon as it was born, it had difficulty suckling its mother and zookeepers had to assist. Two days after the birth, however, it managed to locate the teats.

NOT EASY CARING FOR ELEPHANTS

The first Asian elephants at the zoo were also presented by Thailand, then known as Siam, 132 years ago.

Subsequent gifts of elephants were also big crowd-pleasers, but during World War II all of them were slaughtered due to fears they might escape from their enclosure and run amok in the teeming city.

The popularity of Asian elephants was reignited when an Indian elephant arrived soon after the war ended.

Amid the celebrations over the birth, zookeepers were downcast by the death of Arthit from tuberculosis in August.

While the calf is a male, the other three Asian elephants at the zoo are female, meaning a new male will have to be brought in if the zoo wants to continue its breeding program.

Doing so in captivity is anything but easy.

Pregnancy can last between 21 and 22 months and in almost all cases only one calf is born.

Because calves often weigh around 100 kilograms at birth, any broken bones will prevent it from standing, which in turn could lead to inflammation and the risk of early death.

The hurdles for breeding increase if the cow is carrying its first calf. Labor pains can cause the cow to panic, leading it to attack the calf soon after delivery.

Japan has a total of 82 elephants at 31 zoos, but only half of the animals are at an age where breeding is possible. There are only 15 zoos that have a pair of elephants capable of breeding.

One estimate is that the elephant population in Japanese zoos will decrease to 18 in 50 years unless more are bred or imported.