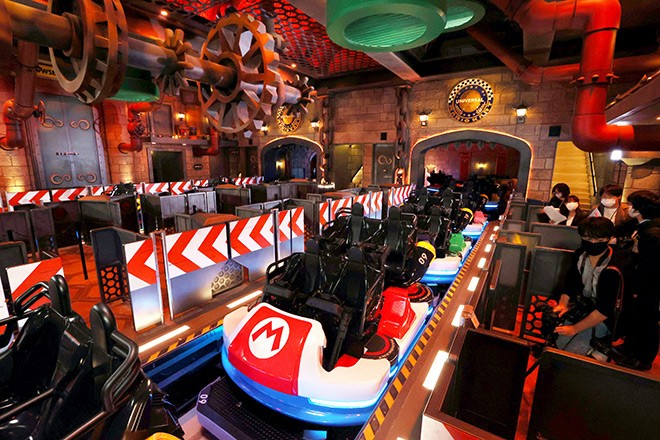 Vehicles for Mario Kart-themed rides shown to the media on Nov. 30 at the new Super Nintendo World area in Universal Studios Japan in Osaka (Jin Nishioka)

OSAKA--Universal Studios Japan (USJ) said it will open a much-anticipated Nintendo Co. attraction on Feb. 4, finally answering the question of how long the pandemic has delayed its start.

The company announced on Nov. 30 that its new Super Nintendo World area, themed on Mario, Yoshi and other fan-favorite characters in the video games, will open more than six months behind schedule.

It was initially scheduled to open this past summer, but was postponed due to the COVID-19 pandemic without any clear indication at the time of how long it would be delayed.

Inside the castle, a stone statue of Bowser welcomes visitors before they head off on an augmented-reality Mario Kart ride.

Each vehicle sports the letter “M” on its hood and can carry up to four people. Guests put on headsets shaped like Mario’s cap and equipped with goggles that let them enjoy racing through the game’s course with Mario and Luigi during the ride.

Outside the castle, visitors can find re-creations of iconic items and characters from the games, such as blocks, mushrooms and Piranha Plants, placed throughout the park’s Super Nintendo World.

USJ will also offer other playful experiences throughout the area to entice guests into making repeat visits. Visitors can work together as teams to play games and can compete against other guests to collect the most coins by wearing wristbands sold in the area that link to a smartphone app.

An official from Universal Creative, which designs USJ and other parks, said they have “done our best with Nintendo” since partnering with the firm in 2015 to jointly develop attractions.

“Guests can enjoy the world of Mario Kart created by using an elaborate combination of the latest imaging technologies with special effects,” the official said.

Despite the delayed start, the theme park has set high expectations for the new attractions featuring the Super Mario game series, which sold 384 million units worldwide as of the end of September.

“The new area will certainly attract many visitors and can contribute to reviving the tourism sector in Japan,” said Taku Murayama, vice president of USJ LLC, operator of the park.

Nintendo is looking to capitalize on the launch of Super Nintendo World to strengthen its business through expanding the use of its game characters outside of game consoles and software. Game and console sales can fluctuate widely, but licensing fees and character goods sales are much more stable revenue sources.

That said, the number of guests to USJ plunged this year as people refrained from outings amid the pandemic.

Since resuming operations in stages in June, the theme park has kept its visitor numbers down to half of what it used to have on busy days in normal years as a precaution against the novel coronavirus. But turnout still often dips below the theme park’s new limit.

Before the Tokyo Olympics and Paralympics were postponed by a year, USJ planned to boost the number of visitors, including foreign tourists to Japan, by opening the new area ahead of the original start of the Games in July this year.