Man in silent world for 60 years finally learned to speak 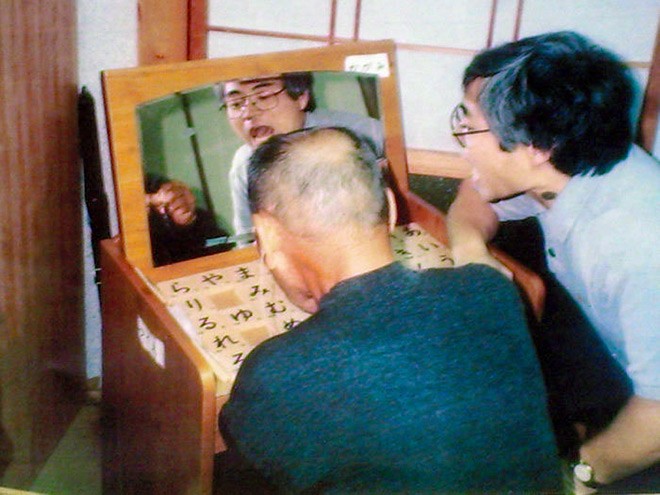 MIYAZAKI--“Shige-anchan” was presumed to be deaf for 60 or so years, having not spoken a word in all that time.

But a doctor who visited the house after the man's mother summoned him to treat her son's feverish condition suspected otherwise.

Shiro Hidaka first met Shige-anchan, as the patient was nicknamed, after he returned to his hometown of Miyazaki in April 1995 to work at his father’s clinic. He had previously worked at a hospital in Nagasaki after graduating from Nagasaki University’s School of Medicine.

Hidaka, 66, made that initial house call in July 1995 following the visit to the clinic by Shige-anchan's mother.

“My son has a disability and is running a fever,” the elderly woman told him. “Could you drop by to see him?”

When Hidaka arrived, he found Shige-anchan lying in bed.

“My son is deaf and can’t speak,” the mother explained. “He ran a fever when he was little and hasn't spoken a word since.”

Hidaka decided to test the man’s hearing by inserting the earpieces of his stethoscope into his ears and tapping the bell. Shige-anchan rolled his eyes in surprise.

Hidaka felt there was a reasonable chance of restoring Shige-anchan's hearing and teaching him to speak again with the help of a hearing aid. He persuaded the mother to allow him to start the training in the hope that Shige-anchan would eventually be able to socialize with others.

Hidaka's vocal training sessions started by drawing mouth positions for Japanese vowel sounds--a, i, u, e and o--on the back of an ad insert from a newspaper. He sat next to the patient in front of a mirror to help him practice how to move his mouth. After a month, Shige-anchan was able to pronounce all the vowels correctly.

Hidaka visited the house up to three days a week. He also used a hearing aid and building blocks for learning hiragana characters during the sessions. About a year or so, Shige-anchan started calling his mother “O-ka-a-sa-n” (mother) and writing his name in hiragana.

Shige-anchan rarely engaged in social interactions for six decades, having had few opportunities to venture out. Eventually, he began enjoying opening up to others after injuries to his forehead gave him a chance to interact with staff at a hospital and day care center.

Around February 2019, Hidaka started writing a book about Shige-anchan's life based on the records.

“I couldn’t bear to see his life documented in the medical records just fade away without anyone knowing the true story,” Hidaka said.

He published the book on Aug. 27, the sixth anniversary of Shige-anchan’s death. The book is titled “Shige-anchan--Rokujunen no Chinmoku o Norikoeta Dansei to Kazoku no Kiseki” (The path Shige-anchan and his family took until he broke 60 years of silence).

The 92-page text explores how Shige-anchan learned to talk over the course of 19 years by introducing the vocal training sessions with a stethoscope and Hidaka's method of teaching 50 hiragana characters using drawings and building blocks. The book is priced at 1,100 yen ($10.54), excluding tax.

“He taught me the joy that we can still feel being connected to each other even if you can’t express yourself in words,” Hidaka said, recalling the many hours he spent with Shige-anchan.