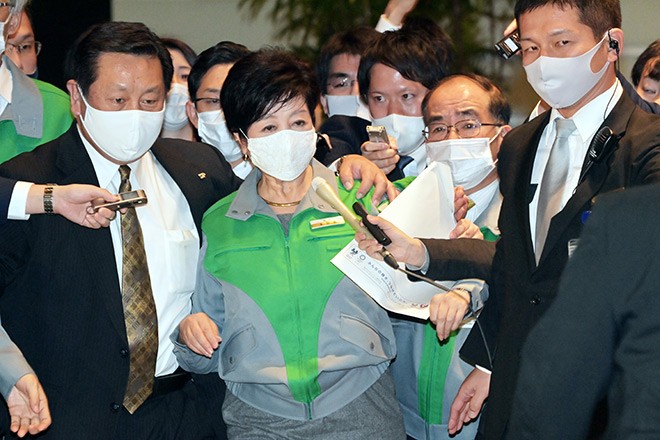 Tokyo Governor Yuriko Koike on Dec. 1 said she will ask people 65 or older and those with pre-existing conditions not to use the Go To Travel tourism-promotion campaign for trips to and from the capital.

“We will focus on how we can protect elderly people who are more likely to develop severe COVID-19 symptoms from being infected,” Koike told reporters at the Tokyo metropolitan government building.

She said the metropolitan government initially asked the central government to temporarily ban elderly people and those with pre-existing conditions from its Go To Travel program for trips to and from Tokyo. But they agreed to call for self-restraint instead.

“I think that detailed information will come from the central government, such as cancellation procedures,” Koike said.

Koike announced her decision after meeting with Prime Minister Yoshihide Suga at the prime minister’s office, where she asked the central government to make the same request.

“I can understand the metropolitan government’s policy,” he said later. “We agreed that the central and Tokyo governments will closely cooperate and prevent the coronavirus from spreading further.”

Tokyo, which has recently been hit by a third wave of novel coronavirus infections, has already urged businesses that serve alcohol and karaoke parlors to shorten their business hours through Dec. 17. The request for restraint on using the Go To Travel program is expected to more or less follow the same schedule.

Health experts have recommended an end to the entire Go To Travel program, which offers discounts to encourage people to travel and prop up the struggling tourism industry during the pandemic.

“There is no doubt that movements of people are associated with the spread of the virus,” said Tetsuya Matsumoto, a professor of public health at the International University of Health and Welfare. “This could send the wrong message that it is OK for people who are not targeted by (Koike’s) request to continue to travel.”

He added, “It would be difficult to curb the increase in infections by this request alone.”