Poll: 4.1% of high schoolers in Saitama provide care at home 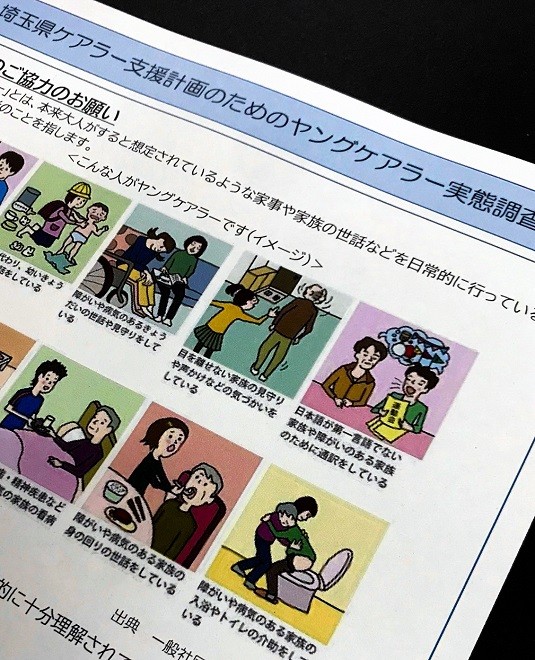 More than 4.0 percent of second-year high school students in Saitama Prefecture describe themselves as “young care providers” because they have to tend to ailing family members and others at home, a survey showed.

One of every three of them must provide care or do household chores every day, according to the prefecture’s survey results released on Nov. 25.

The study, conducted between July and September, covered all 55,772 second-year students enrolled at the 193 private and national and other public high schools in the prefecture.

The prefecture received responses from 48,261, or 86.5 percent, of the students.

It is believed to be the first large-scale survey of a prefectural government on home care provided by students.

“It appears noteworthy that one in 25 students are (young carers), although it is difficult to evaluate the results because this is our first survey,” said an official of the prefecture’s general regional care department.

The results showed 1,969, or 4.1 percent, of the students view themselves as young care providers, and 696 of them must perform those and other tasks on a daily basis.

In addition, 501, or 25 percent of the young carers, said they do not have anyone to share their problems and complaints with, adding to the anxiety and sense of burden among the under-18 children.

The survey asked the students 17 questions about such topics as how often they look after people needing care. The questionnaire provided two comment sections where the students could speak freely.

Most of them, or 688, started providing care at home during their junior high school days, while 395 began the practice as fourth- to sixth-graders at elementary school, 383 as high schoolers, and 238 as first- to third-graders in elementary school.

More than 80 percent said they provide care at least once a week, including 441 who do so twice or three times a week.

Multiple answers were allowed for some questions.

While 138 said they cannot rely on anyone else in providing care, 825--the largest group--said their care work at home exerts no negative impact on their school life.

Among those whose home care interferes with their daily lives, 200 said they “cannot spare enough time to study.”

According to the free comment sections, one respondent needs to “skip classes to protect parents with health problems from being infected with the novel coronavirus, making it difficult to keep up in class.”

Another student forced to do home chores has frequently been late for school, while another expressed anxiety about employment, marriage and other topics, saying, “I have no idea what to do for my future.”

A respondent who has been a carer since the second year of junior high school feels stress and once fell sick but said spending more time with family members has made life happier.

Most of those who require care at home are the students’ grandparents or great-grandparents, the survey showed.

Many students cited “parents too busy with work” as the reason for having to take care of family members.

Although 25 percent of the carers have nobody to talk to about their problems, other respondents said they share their troubles with parents, siblings and friends. Fifty-six said they talk with “individuals I got to know via social media,” exceeding 34 who contact class teachers and seven who visit nurse’s offices within their schools.

A student suggested holding exchange sessions to “share difficulties with each other and seek advice.” Another respondent said some carers are likely being “told (by the care recipients or others concerned) not to speak of that.”

Asked what they do at home, 1,143, the largest number, said they prepare meals, wash clothes and do other household duties.

One-fifth of the carers, or 405, help those in need to take baths, go to the toilet and do other things.

Saitama Prefecture in March this year introduced an ordinance to support young carers, the first among prefectural governments. Based on the results of its survey, Saitama Prefecture is looking to devise a plan to assist such care providers by the end of this fiscal year.

The central government also plans to conduct a survey of young carers at schools in some regions in December or later, its first attempt to address the issue by targeting educational institutions, according to the welfare ministry.

The results, expected by the end of the fiscal year, will be used to develop a support system for young carers as well as an environment where children can easily talk about their problems.

The welfare ministry had conducted a survey on young carers from fiscal 2018 to 2019 by asking regional councils that deal with children who need protection from abuse. But the survey did not seek direct comments from the children.