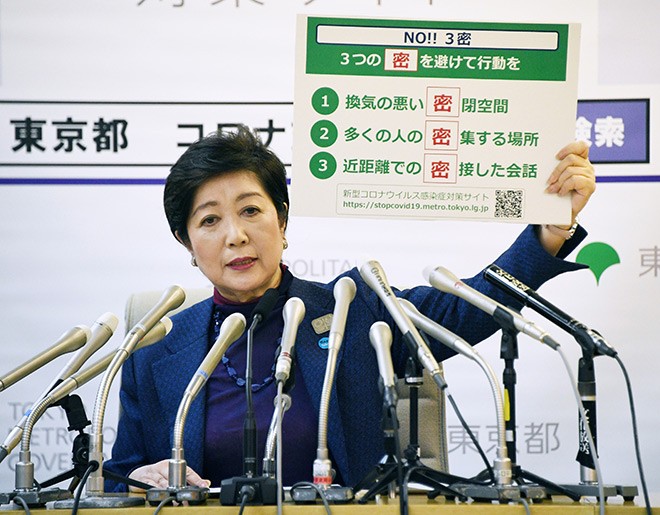 Tokyo Governor Yuriko Koike urges people to avoid “sanmitsu,” or three situations where the risk of contracting the novel coronavirus is considered high, at a news conference in Tokyo on March 25. (Asahi Shimbun file photo)

Japan last year around this time was still charged up after the grand success of the Rugby World Cup and the historic run of its national team, the Brave Blossoms.

Reflecting the euphoric mood, “One team,” the unifying mantra for the team made up of players and coaches from diverse backgrounds, was named “Buzzword of the Year."

The buzzword chosen for 2020 mirrors a grim picture of the nation under the novel coronavirus pandemic and ignited petty feelings among leaders over who should get the credit for it.

As the pandemic started raging in the capital and the possibility of issuing a nationwide state of emergency began floating around in late March, Tokyo Governor Yuriko Koike introduced the term “sanmitsu” (3-mitsu) also known as the "three Cs" to urge residents to avoid “confined spaces with poor ventilation, crowded places with many people nearby and close-contact settings such as close-range conversation.”

Since holding up a flip board on March 25 bearing the "mitsu" slogan, Koike, 68, has repeatedly been seen saying, “Mitsu desu!” (It’s mitsu!), and the word has become part of the public daily lingo.

Including the winner, eight buzzwords on the final top 10 list of the 2020 trendy words were directly and indirectly related to the pandemic.

“Abenomask,” a term mocking then-Prime Minister Shinzo Abe's much-ballyhooed nationwide free distribution of cloth masks to protect against COVID-19, was among the eight.

U-Can, Inc. the company that has screened buzzwords and hosted the annual year-end event since 2003, selected Koike as the recipient of the award.

Koike, who joined the awards ceremony online, said the term sanmitsu “made a strong impression and has stuck with people as their daily life changes dramatically.”

But the anti-virus health protocol was actually coined by the health ministry, which pressed the public to avoid the three congested situations early on in March.

Together with the prime minister’s office, the ministry created a public announcement flyer which warned that people who did not follow the sanmitsu advice on social distancing risked sparking clusters of infections, also issuing an English version with the phrase, “Avoid the Three Cs!”

But the message didn't reach the greater public until Koike started blasting out a shortened, catchier version of it in her appearances.

A computer game was posted online featuring a Koike-like figure flying over and running around the metropolis searching for gatherings of people to break up while saying the term, which the governor was amused by and joked about.

Koike, at least once, softly warned reporters swarming around her to get the updates on the metropolitan government’s handling of the pandemic, by saying, “It’s mitsu!”

Such incidents took off on social media, quickly spreading the term, U-Can said.

At the awards ceremony, Koike took credit for the buzzword, saying, “I have done all kinds of things to communicate (the message).”

The comment seems to have stirred up jealous feelings among some health ministry officials.

Chief Cabinet Secretary Katsunobu Kato, who served as health minister until mid-September, has maintained a nonchalant attitude about the term sanmitsu receiving the buzzword award.

“(I’m) not interested in who gets the award,” Kato, 65, said at a Dec. 1 news conference when asked for comment on the news that Koike was credited for the term.

Still, he didn't shy away from giving a reminder that Koike was not necessarily the buzzword's originator.

“It was at my news conference around March, and I was the health minister back then, I asked people to avoid gathering at such places,” Kato said.

“Thanks to many people’s efforts, the term has won the buzzword of the year title.”

The fact that the central government was not named as the award's recipient does not bother him and his fellow government officials, Kato insisted.

“I said ‘many people’ and, of course, Governor Koike is one of them,” said Kato, with a wry grin.

(Compiled from reports by Bunna Takizawa and Naoki Kikuchi.)