Ex-trainees from Vietnam arrested in search for 742 stolen pears 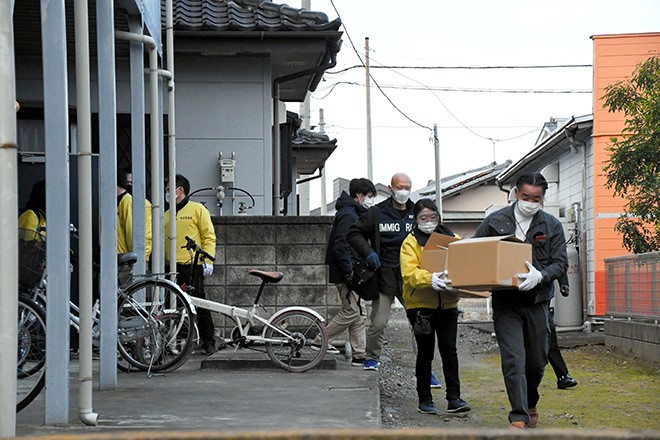 SAITAMA--Three desperate former technical intern trainees from Vietnam were arrested on Dec. 2 in connection with the theft of hundreds of pears worth about 273,000 yen ($2,600), Saitama prefectural police said.

The former trainees told police they needed money to pay off the debts they incurred to come to Japan, and that they could not return to their home country because they were broke, sources said.

A total of 742 pears were stolen in August and September from an orchard in Kamikawa, Saitama Prefecture.

Saitama prefectural police searched an apartment in Isesaki, Gunma Prefecture, on Dec. 2 in connection with the theft and arrested the three Vietnamese on suspicion of overstaying their visas in violation of the Immigration Control and Refugee Recognition Law.

According to the sources, police had been looking for a connection between visitors to the apartment and individuals who abandoned a motor vehicle near where the pears were stolen.

Police on Sept. 4 and 5 found knapsacks containing 182 pears as well as garbage bags that the Isesaki city government asks local residents to use. The abandoned motor vehicle had license plates from Tsukuba, Ibaraki Prefecture.

Police searched the vehicle for evidence and checked social media posts for clues. They determined that people who frequented the Isesaki apartment had used the vehicle.

Saitama prefectural police have received reports about stolen fruit since August. About 5,500 pears worth about 1.38 million yen were reported stolen from Kamikawa and two other municipalities.

Thousands of pears and peaches were also reported stolen from Gunma and Tochigi prefectures. Livestock, such as pigs and chickens, have also been taken from farms in those prefectures.

In November, a 29-year-old former technical intern trainee from Vietnam was arrested and later indicted on charges of illegally slaughtering a hog at his home.

Police also arrested around a dozen Vietnamese former technical intern trainees in Ota, Gunma Prefecture, on suspicion of overstaying their visa. The home where they were found was searched in connection with the livestock thefts.

According to investigative sources, many of the former trainees had debts of 1 million yen or so stemming from expenses needed for them to come to Japan. But many ended up fleeing their workplaces in Japan because of the strenuous conditions and other reasons.