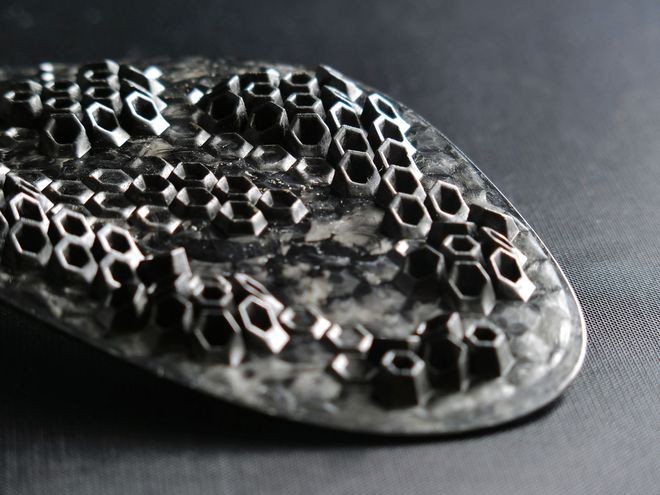 A multitude of protrusions of different heights are arranged on the outsole of Asics Corp.’s spikeless track shoe (Provided by Asics Corp.)

“Did you really say you can run in these shoes?” said Kiryu, the first Japanese to run the 100 meters in under 10 seconds, when he first saw a prototype of the Metasprint in 2018.

But Kiryu speedily became a convert to the new technology.

He was wearing the Metasprint when he clocked a time of 10.16 seconds in the 100-meter semifinal during the World Athletics Championships in Doha, Qatar, in September last year.

Kiryu has even said he now feels more comfortable competing in the spikeless track shoes.

Metal spikes were once considered indispensable for sprinters' track-and-field shoes.

However, developers continued to rack their brains over what innovation would allow the shoes to grip the ground more efficiently than spikes.

A clue to solving that problem came from an original technology of a fiber manufacturer, which principally produces fabrics for wedding dresses and curtains.

Members of the development team at Asics started researching the subject five years ago, curious to discover if they could reduce the time it takes for spikes to enter the track surface and exit.

Typical sprinter's spikes, arranged with several metal pins on the outsoles of the surface, generate propulsion force by using the pins to grip the surface. Over many years, that remained the accepted standard in the industry, including at Asics, which has been producing track shoes with spikes since the 1964 Tokyo Olympics.

None of the core members of the development team, however, had ever been track-and-field athletes. The paradigm shift came from a simple question they had: Couldn’t spikes hinder the sprinter when they stick in the track?

Asics officials said spikes often stick obliquely in the ground, thereby requiring the runner to use extra force. Research led the developers to conclude that the propulsion force could be made more efficient if the ground were to be clutched not at “spots” but along “lines.”

An Asics study showed the time to run 100 meters would be 0.048 second faster if the spikes were removed and propulsion increased.

Protrusions arranged in a honeycomb structure, or a tight, honeycomb-like pack of hexagonal cells, were conceived as an embodiment of the “lines” along which to grip the ground instead of at the points of the spikes.

Spikes are regulated by rules, including how many there can be in the shoe. The developers thought that without spikes, there would be more freedom of outsole design, so any number of necessary protrusions could be arranged wherever necessary.

They also thought it would be possible to analyze the running form of a sprinter and introduce, accordingly, slight variations in the heights of the approximately 5-millimeter-tall protrusions. This would allow the shoes to be custom tuned to allow the sprinter to glide over the track surface more efficiently.

TURNING THE IMPOSSIBLE INTO POSSIBLE

It turned out, however, that existing materials, when used in the protrusions, could not withstand the load and too readily failed. The developers also experimented with metal, only to discover it weighed too much. That was the moment the development team faced a difficult challenge.

They collected information from business contacts and other sources in a quest for materials that are both lightweight and strong. The search took them to Flexcarbon, a plastic material reinforced with carbon fiber, which is patented by Suncorona Oda Co., an Osaka-based fiber manufacturer.

Suncorona is advanced in technologies for splitting fibers into single filaments. The company separates threads into fiber filaments with a thickness of only 20 micrometers, one-third the thickness of a human hair, from which it manufactures see-through fabrics.

Curtains are the mainstay products of Suncorona, with buyers including Nitori Co., the furniture giant. Officials said Suncorona also holds one of Japan’s largest market shares in wedding dresses.

Flexcarbon was developed on the basis of that technology.

To manufacture the material, carbon fiber is separated and processed into flat sheets with a thickness of only 30 micrometers. More than 20 layers of such sheets, impregnated with resin, are laminated into Flexcarbon, which has about the same strength of metal but weighs less than half, according to Suncorona officials.

Asics’ pinless spikes were the first product in which Flexcarbon was put to practical use.

“The material is filled with romanticism about turning the impossible into a possibility,” said Tokio Oda, 75, the president of Suncorona, who added that his goal is to have Flexcarbon adopted for use in automobiles and other products in the future.

For Kiryu, developers repeatedly fine-tuned the heights of the protrusions on the outsoles. They ended up with a custom-made pair with different shapes on the right and left, whereupon Kiryu became a regular user of them.

Asics in June put the Metasprint on sale for the public. At 39,600 yen ($380), including tax, the Metasprint could hardly be called a bargain, but the track shoes have turned out more popular with customers than expected, company officials said.

During the Hokuroku Sprint competition in Yamanashi Prefecture in August, the Metasprint was worn by the top four finishers out of the eight sprinters who made it to the finals, including Kiryu, who emerged victorious.

“Feedback from athletes who have tried out our products will allow us to make further improvements,” said Yuya Kozuka, 33, a member of the development team. “I hope our spikes will also continue to evolve just as athletes continue to evolve.”