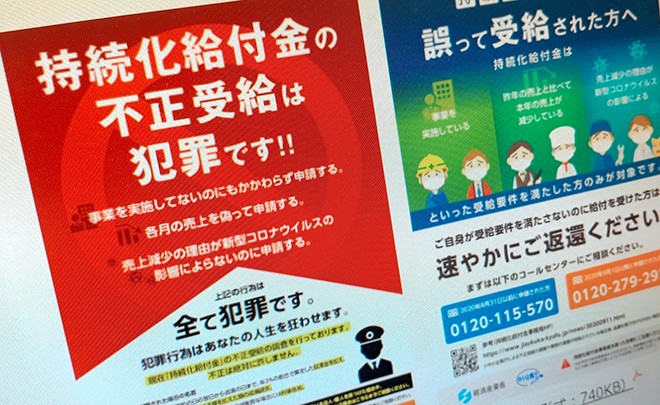 OSAKA--A former National Tax Agency official is under arrest over suspicions of his involvement in the fraudulent receipt of more than 100 million yen ($956,900) in government pandemic relief money.

Police also arrested Takeshi Imai, who used to work at Yamamoto’s tax accounting office in Osaka. The office was closed in November.

Osaka prefectural police did not say whether either of the suspects admits to the allegations.

In one of the cases involving Yamamoto, police here said he approached a man in his 20s working for a medical corporation where Yamamoto served as an adviser and proposed he apply for the government aid money back in June.

The government program is aimed at sole proprietors, along with small and midsize companies, trying to keep their businesses afloat amid the pandemic.

Proprietors who saw their revenues drop at least by half over the course of one month, compared with what they were a year earlier, are eligible to receive up to 1 million yen in relief funds.

Companies in a similar situation can respectively receive up to 2 million yen.

The man was not qualified to apply. But Yamamoto helped him to do so by registering online for the relief program through the industry ministry’s Small and Medium Enterprise Agency by disguising him as a sole proprietor and submitting a copy of the man’s ID, police said.

The man later received 1 million yen in his bank account. He transferred 200,000 yen into Yamamoto’s bank account, which police view as a commission.

The government designed its relief program to be lean and nimble, so it could crank the taps open and swiftly issue payments to proprietors and companies that found themselves in financial dire straits because of the pandemic.

According to the Small and Medium Enterprise Agency, a total of 5 trillion yen for 3.83 million applications had been provided in relief aid as of Nov. 30.

But the program’s design left it weak to exploitation, and it quickly became a hotbed of corruption.

As of Nov. 30, criminal charges were being pursued against 200 or so individuals in Tokyo and 33 other prefectures in suspected fraud cases associated with the program, according to the National Police Agency. The suspects include company employees, college students and gang members.

The damage is estimated to total 146 million yen.

The Small and Medium Enterprise Agency began to see a spike in the number of consultations from aid recipients as the number of arrests increased over people cheating the program.

There were 8,961 offers to return relief money as of Nov. 26. Of this, the money from 4,728 cases totaling about 5 billion yen has been returned to the government.

The Ministry of Economy, Trade and Industry said it will not impose a 20-percent penalty on individuals who have cheated the system if they voluntarily return the money before any investigations into the receipt of the funds are held.