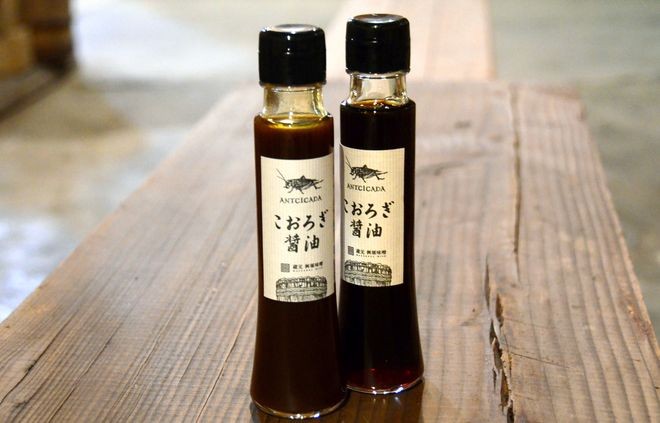 The miso maker, which has seen brisk sales of its bug products, is now preparing for a second round of soy sauce production.

The idea for the products came after Yoshinari Noda, 36, the fourth-generation president of Noda Miso Syoten, started giving miso-making classes around five years ago. A student asked him if he could “create miso from bugs.

Noda, an avid traveler who had tried insects overseas, found the bugs rich in protein, like soybeans. The idea of eating insects as a way to alleviate food shortages has spread around the world.

In 2018, he produced miso from crickets and grasshoppers.

The following year, Noda presented soup flavored with the insect miso at an event for young entrepreneurs. There, he met an official from Antcicada, a restaurant in Tokyo’s Chuo Ward that is famous for its cricket ramen.

Antcicada was already considering creating soy sauce with crickets, so it asked Noda to work together on the new product.

Preparations to market the soy sauce started in January 2020 and finished in September.

The two-spotted cricket, which has a “strong savory and aromatic flavor,” and the house cricket, characterized by its “delicate and elegant taste,” were used.

The crickets were provided by a start-up company in Tokushima Prefecture and another Japanese company.

The insects were pulverized into powder and treated with rice malt and salt in wooden buckets at Noda Miso Syoten. No soybeans were used in the production.

“The flavor makes a difference,” said Noda, referring to the finished soy sauce. “I cannot come up with any good descriptions of the flavor other than ‘cricket-like,’ but it resembles that of nam pla and other kinds of fish sauce.”

Yuta Shinohara, 26, manager of Antcicada, explained how the cricket soy sauce should be used.

“The sauce will match white meat fish sashimi and other meals that will not disturb the soft taste of the cricket soy sauce,” Shinohara said. “If heated, soy sauce-glazed ‘dango’ dumplings and grilled rice balls will pair well with it.”

HUNDREDS OF CRICKETS FOR SINGLE BOTTLE

A 100-milliliter bottle of the soy sauce uses 480 crickets and carries a price tag of 1,640 yen ($15.67) after tax. It is relatively expensive because crickets are 10 to 20 times more costly than soybeans, according to Noda.

If wider insect consumption leads to increased cricket production, the price could be lowered.

Eating insects has been seen as a way to resolve world hunger problems because bugs are full of nutrients and require less land and water compared with animals.

“Insects are the most familiar species on Earth and make up an overwhelming part of living creatures both in types and numbers,” Shinohara said. “Their potential is high as a new edible material.”

He continued, “The soy sauce’s taste can be realized only with crickets. Soybeans may be much cheaper and easier to process, but I want to show how impressive these unknown tastes are.”

The company produces 2,000 tons of miso annually, making it one of the largest manufacturers that uses traditional wooden buckets.

Aichi Prefecture is noted for Haccho Miso and other sorts of miso made only from soybeans and salt. Noda Miso Syoten had also rarely used non-soybean materials for production.

“The quest made me realize that soybeans are great in balancing protein and fat,” Noda said. “Now that I have unexpectedly used crickets, I can flexibly try any ingredient other than soybeans.”

The cricket soy sauce is available at Noda Miso Syoten and the shopping site of Antcicada at (https://antcicada.shop/).

The company is preparing 400 bottles for release early next year.