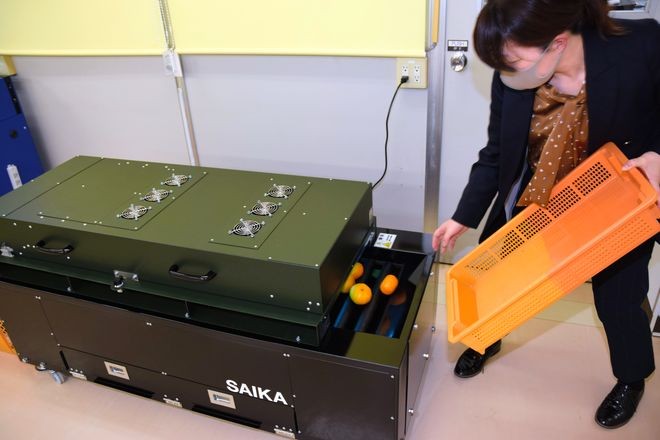 Equipment that applies ultraviolet rays to prevent mikan from rotting is shown on Nov. 19 in Wakayama. (Takuya Nishie)

Researchers at the Saika Technological Institute Foundation, which produces food quality inspection equipment and devices, and other parties, including the Shizuoka prefectural government, discovered that ultraviolet ray application causes strong stress on the fruit and stimulates its self-defense function.

This leads to production of a sort of polyphenol known as scoparone that has antibacterial effects and stops the skin from decomposing.

Saika has developed and marketed equipment, measuring 1.5 meters long and weighing 140 kilograms, to prevent mold from forming during storage and transportation of mikan.

Mikan are rotated and carried on a conveyor belt in the machine for even exposure to ultraviolet rays for 20 to 25 seconds.

It can treat 700 kilograms of mikan per hour, and the antibacterial effect will continue for two to three weeks, according to the scientists.

“We will expand the use of the device to cover citrus fruits other than mikan,” a Saika official said.

At least one farmer in Wakayama Prefecture has reportedly bought the equipment.

Mikan farmers visually sort out damaged oranges before shipping, but undetected scratches and damages caused during delivery can accelerate decomposition, leading to rotten fruit by the time it reaches consumers.

In their experiments, the scientists exposed half of a mikan to ultraviolet rays and left the other half untreated. The untreated section went rotten in most mikan, but less decay was detected in the treated half after the fruit was kept for a week with small scratches and mold.

Even in the treated parts that rotted, the decomposition speed was slower, they said.

Strong ultraviolet rays can turn mikan blackish, so the scientists had to adjust the application time and strength for the best results.