Go To Travel tourism program to be extended until next June 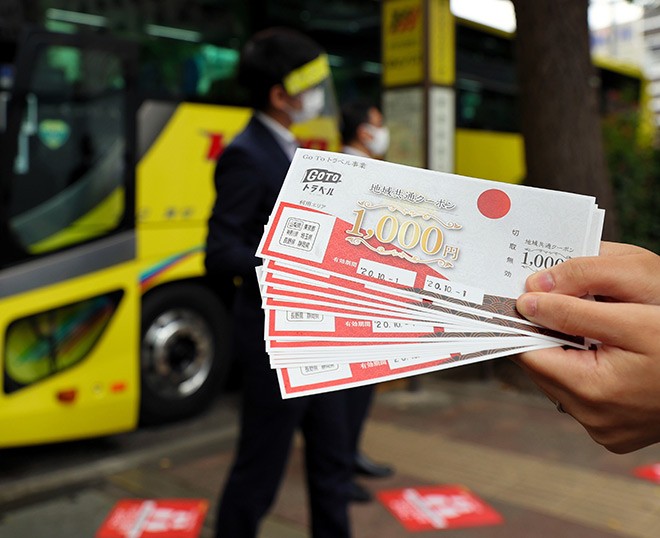 Coupons are provided to participants of a bus tour in the central government’s Go To Travel campaign on Oct. 1 in Tokyo’s Shinjuku District. (Asahi Shimbun file photo)

The controversial Go To Travel campaign won't be put to bed at the end of January and instead be extended until sometime around June 2021, multiple sources said.

The central government is expected to include an extension for its tourism campaign in its emergency stimulus package that will be compiled on Dec. 8.

The government designed the subsidy campaign to promote travel and tourism after the coronavirus pandemic dealt a massive blow to the industry. Its core appeal is a discount of 35 percent on hotels and tour plans. That aspect will be kept intact until around spring.

After that, the government plans to ramp down the subsidies.

It initially budgeted spending for Go To Travel to run through the end of January.

But as novel coronavirus infections continue to surge and with the domestic economy on the decline once again, officials will extend the campaign to help prop up the economy.

To avoid the number of Go To Travel users concentrating on weekends, the tourism ministry will discuss reducing the discounts on weekends and changing the ratio of the 15-percent discount shopping voucher.

The number of COVID-19 patients has risen sharply since the beginning of November, prompting the government’s expert panel dealing with the pandemic to urge a review of the campaign.

Prime Minister Yoshihide Suga has placed the program at the center of his pandemic-relief policies, and he may yet have to make more readjustments and face new criticisms depending on how the pandemic situation and public opinion evolve.

But Go To Travel is not the only subsidy program in line for an extension.

At a ruling Liberal Democratic Party meeting on Dec. 2, the agricultural ministry revealed a plan to extend voucher sales for the Go To Eat campaign.

The ministry is expected to include the necessary costs for the extension in the third supplementary budget proposal of this fiscal year.

Under the initial plan, vouchers offering additional value of up to 25 percent for meals were placed on sale. They were expected to be sold until the end of January and not expire until the end of March.

But under the new budget, the vouchers will continue to be available for purchase after February and will be redeemable until after April.