Virus-designated hospital in Osaka in crisis after medical staff quit 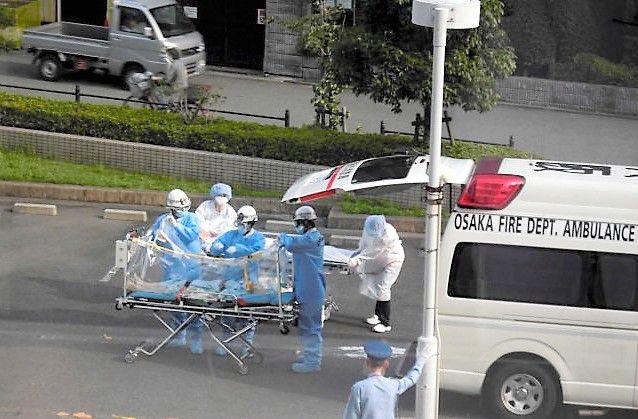 OSAKA--A city hospital designated to treat COVID-19 patients is struggling to get by in its day-to-day operations after dozens of doctors and nurses quit their jobs.

Osaka City Juso Hospital in Osaka’s Yodogawa Ward has asked authorities to send health care workers from other hospitals to help it survive the crisis.

Medical staff have left the hospital after being forced to work long hours and in areas that are not their expertise.

“Considering the psychological burden, we may not be able to prevent staff from leaving,” Yukio Nishiguchi, director of the Juso hospital, said. “I’m still worried if we can continue like this.”

The general hospital with 18 specialties became the nation’s first COVID-19-designated facility on April 14, when Osaka Mayor Ichiro Matsui made the declaration.

At that time, Japan was under a state of emergency to deal with the novel coronavirus pandemic, and the number of moderate COVID-19 cases was increasing.

Even hospitals equipped with ECMO lung bypass machines to treat those with severe symptoms were forced to accept those in moderate condition, making it harder for health officials to secure hospital beds for seriously ill patients.

Matsui designated the Juso hospital to treat moderate patients and play a role of “defense against a health care collapse.”

From April 16, the hospital stopped taking in outpatients and first-time patients and performing operations.

About 200 hospitalized patients were either released or transferred to other hospitals.

Staff members had a difficult time finding places for 280 expectant mothers who were scheduled to give birth at the hospital.

But around June, doctors and nurses started to quit. By October, about 25 staff members, including four doctors and 14 nurses, had left the hospital.

Some of the doctors were unable to see patients in their expertise because of the change, while nurses who worked in gynecology could not attend deliveries.

In an attempt to prevent more staff members from leaving, the hospital in July resumed treatments for outpatients at departments other than gynecology.

However, the number of visitors to the hospital has remained at about half of the pre-pandemic level.

Around half of the hospitalized COVID-19 patients were in their 80s. Many of them needed assistance to eat or use the toilet, making the shortage of nurses more serious.

The hospital reached its limit after taking in about 60 COVID-19 patients.

The city government on Nov. 26 decided to dispatch doctors and nurses from other facilities, such as Osaka City General Hospital, to the Juso hospital.

Another challenge facing the Juso hospital is that it has only two artificial ventilators and no ECMO machine.

“We have no means of fighting,” Nishiguchi said. “It is not right to force one hospital to bear the burden. If possible, I want the (city) to remove the hospital’s name from the designation list.”

(This article was written by Yoshichika Yamanaka and Takefumi Horinouchi.)