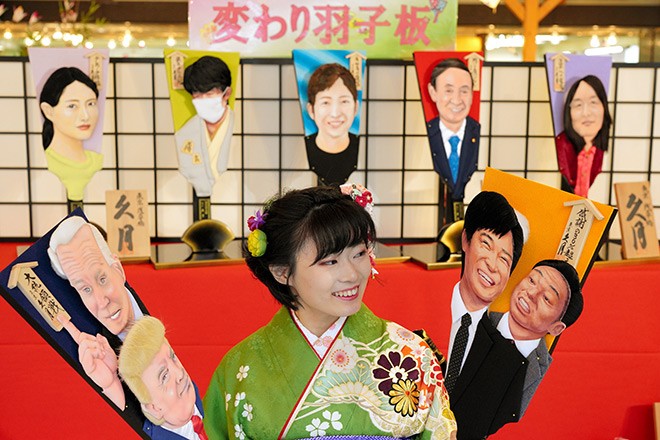 If politics makes for strange bedfellows, then U.S. President Donald Trump and President-elect Joe Biden can certainly share a traditional "hagoita" together.

The outgoing incumbent and his vanquisher are depicted on a wooden paddle unveiled at the Kyugetsu doll store in Tokyo on Dec. 3.

The company each December honors multiple figures who have frequently come up in people’s conversations and captivated the public's imagination during the year by putting their images on hagoita.

Trump and Biden certainly fit the bill, with the contentious U.S. presidential election and the lingering court challenges over the voting drawing major attention in Japan.

On the 60-centimeter piece of wood, with Biden pointing a finger and Trump smirking, the two look as if they still are locked in fierce debate.

Rikako Ikee, a top swimmer and leukemia survivor who embarked on an emotional comeback this year, was among this year's selected nine.

Popular shogi prodigy Sota Fujii, 18, who won two major titles during 2020 and became the youngest to do so, was also drawn on a paddle, wearing a mask.

Hagoita used to be a gift to a girl to celebrate her first New Year and protect her from evil.

In hanetsuki, two or more players hit a shuttle, a hard black ball made of a plant seed called “mukuroji,” with the paddles.

The seed is believed to represent a state of perfect health.

Kyukichiro Yokoyama, president of the doll company, hopes such traditional superstitions work in batting away the novel coronavirus pandemic.

“We have put our wishes for knocking over the disease and making the economy bounce high on these paddles,” Yokoyama said.

The company began making the people-of-the-year paddles in 1986. This is the 35th occasion that Kyugetsu has produced the special hagoita.

The seven paddles featuring the nine personalities will be displayed at the company’s store in Tokyo’s Taito Ward until Dec. 4. They are not for sale and will be on show at department stores and other locations nationwide until February.