Fans flock to a cracked boulder in Nara’s Yagyucho district to recreate a memorable scene from the “Demon Slayer: Kimetsu no Yaiba” manga series. (Nobuhiro Shirai) 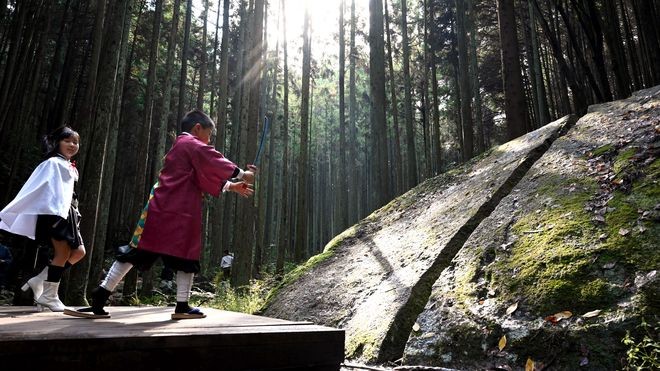 Children dressed as characters from “Demon Slayer: Kimetsu no Yaiba” pose in front of the Itto-seki boulder in Nara’s Yagyucho district on Nov. 8. (Nobuhiro Shirai)

NARA--“Demon Slayer” fans, many wearing costumes, are again flocking to a cracked boulder here because of its striking similarity with one in the manga series.

The large Itto-seki rock rests in a forest in Nara’s Yagyucho district, which is famous for legends of swordsmen.

The area has now become a “holy place” for fans of the manga because they can re-create a memorable scene in which the protagonist splits a large boulder with a sword.

The comic books are selling at a record-breaking pace and an animated feature film adaptation has been a blockbuster success.

According to the Yagyu Tourism Association, the number of visitors started to grow around March this year after word about the cracked boulder spread on social media.

The number temporarily decreased because of the novel coronavirus pandemic, but the figure started increasing again in summer.

The number of cars in a nearby parking lot in August, September and October increased by four to seven times from the same months the previous year, the association said.