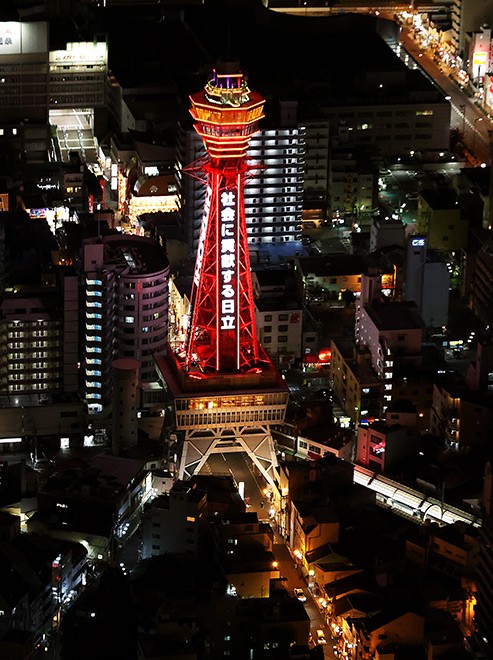 Tsutenkaku Tower in Osaka’s Naniwa Ward is lit up in red after the Osaka prefectural government issued a “red alert” to warn against the rising number of novel coronavirus cases on Dec. 3. (Yuki Shibata)

“We are in a medical state of emergency,” Yoshimura said.

A red alert marks the most serious level in the prefecture’s standards concerning the COVID-19 pandemic.

However, Yoshimura said the prefectural government will not impose tough restrictions like it did in April, when the nation was under a state of emergency.

“Socio-economic activities are extremely important, too,” the governor has repeatedly said.

All requests under the red alert are based on the special measures law established to deal with the pandemic and are not enforceable by any court.

The prefectural government called on residents “not to go out as much as possible unless it is necessary and urgent” until Dec. 15.

The prefectural government’s panel to deal with the novel coronavirus crisis also decided to ask businesses serving alcoholic beverages in Osaka city’s Kita Ward and Chuo Ward to close at 9 p.m. until Dec. 15. The request was initially set to expire on Dec. 11.

Under the Osaka prefectural government’s standards, a red alert is issued when 70 percent of hospital beds for COVID-19 patients with serious symptoms are occupied.

As of Dec. 3, there were 136 seriously ill COVID-19 patients in the prefecture, and 66 percent of the 206 available hospital beds were occupied.

The situation has not hit the official red alert level, but Yoshimura said, “It is fairly certain to reach 70 percent.”

In fact, 82.9 percent of the 164 beds that are immediately available are currently occupied.

Infection clusters at nursing homes in the prefecture have also occurred. The number of infected people aged 60 or older is larger than during the peak time of the previous virus surge.

Osaka prefectural officials said the rate of increase in the number of new COVID-19 cases in the prefecture “has clearly slowed down.”

Officials have pointed out that even if the number of new cases slows down, the occupancy rate of beds for severe patients will likely go up.

Tsutomu Aoyagi, the 74-year-old owner of Aoyagi, a restaurant that specializes “fugu” (pufferfish) in Osaka’s Chuo Ward, gazed at the empty dining space that can seat 50 customers.

“We’ve got zero group reservation this winter,” he said. “For a fugu restaurant, December and January are the busy season when we make a year’s worth of money.”

The illumination color of Tsutenkaku Tower, a symbol of Osaka in the Shinsekai district in Naniwa Ward, has changed according to the alert level as requested by the prefectural government.

At 8 p.m. on Dec. 3, the tower was lit up in red, after Yoshimura issued the red alert.

It was “an agonizing decision,” said Ryuko Takai, the 45-year-old president of Tsutenkaku Kanko Co., which operates the tower.

“I have sometimes been told by business people around the tower, ‘Are you going to kill us?’” he said, referring to the higher alert levels reflected in the tower’s illumination.