Young woman tries to cope after life of sexual exploitation 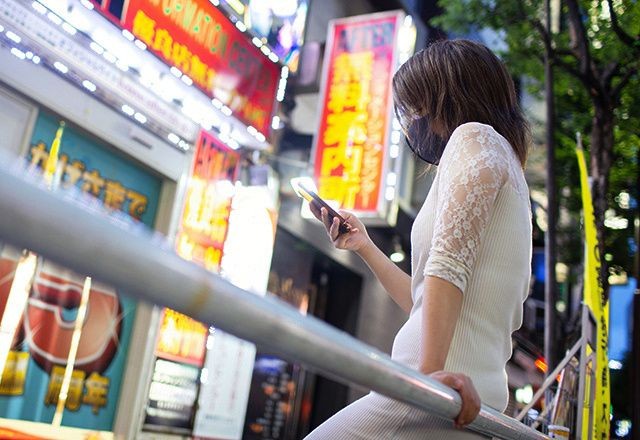 A woman, who left home to escape sexual abuse and lived with men she found on social media while suffering mental problems, poses in Tokyo’s Shinjuku Ward. (Naoko Kawamura)

As a young woman participated in a Flower Demonstration in front of Tokyo Station to eradicate sexual violence, she suddenly had a "me too" moment.

Listening to other participants’ stories, she began thinking she “might be a victim, too.”

She received a red gerbera flower from an elderly woman, which nearly brought tears to her eyes.

“I felt that I was not alone for the first time in many years,” she said.

The woman's troubled past echoes a succession of cases where runaway children were found at locations such as homes of men whom they got to know via social media and online video games.

The head of a Tokyo group that helps runaway children find a safe haven said a society-wide effort is needed as the problem has worsened, particularly during the novel coronavirus pandemic.

The troubled young woman who attended the Flower Demonstration earlier this year in February sold sex for the first time in her early teens for a paltry sum.

The woman, now 20, until recently continued seeking out men online who would offer her a place to stay.

When she posted a message on social media, saying, “I have no place to stay,” a plethora of replies instantly came from strangers.

One of the responses said, “I can listen to your problems,” while another expressed ostensible tenderness, stating, “You can use my apartment in a Tokyo ward. You need not pay. You can live there yourself, and I will not be there.”

The woman wrote, “Is that really so?” in response to one of the posts, and the recipient quickly sent back questions, such as “Will you live here?” and “How are you? Don’t you feel cold?”

Raised in eastern Japan, the woman found her patrons in this manner since she ran away from home when she was only 14.

Before that, she lived with her parents and younger brother. Her father, who worked as an association staff member, would often punch and kick her and her mother when he was in a foul mood. He once pushed her down the stairs.

“I do not need you,” the daughter recalled her father saying. “My life has been ruined because you was born to me.”

When she turned 13, the father crawled into her bed at night. He molested and raped his daughter. The father then started sneaking into the bath with her.

While stroking her entire body with his hands, the father called the practice part of “parent-child communications.” He told her that “this is nothing unusual. I will make your body clean.”

Her mother must have been aware of her husband’s misconduct, but pretended to know nothing.

Tormented by the thought that “I do not want to stay at home,” the woman left her house for the first time on a rainy day in November when she was 14. After being severely beaten by her father, she ran out shoeless in her pajamas.

Shivering in the cold, she was found by a convenience store staffer. Police were called and came to pick her up. As she could only say she did “not want to go home” without explaining why, she was soon returned to her family.

Since that time, she started feeling that “everything bad that occurs was because I was born.”

Several months later, the youngster spent time at a comic book cafe with a man she met on a social media site. She had sex with him for 5,000 yen ($48).

“It was horrific but it was still better than staying at home,” she recalled.

After suffering repeated sexual exploitation and violence at the hands of her father, the woman could no longer feel safe at home. She thus repeatedly ran away.

Although she was once taken to a child consultation center, she could not confess that she was being sexually abused. After going to a children’s training facility, she started working as a live-in employee at a restaurant when she was 17.

But she failed to continue to work, and lost the job and the place to live. As the teen had little money, she stayed briefly at the residences of the many men she met through social media.

Most of her patrons were company employees in their 30s to 40s. She would spend the night at their homes and leave in the morning when they went to work.

During the day, the woman visited a “deai” cafe where customers can find partners for prostitution and other purposes.

As female customers were exempted from paying the entrance fee, she consumed snacks and juice drinks there while waiting for a possible patron.

Finding someone interested in hooking up, they would leave the cafe together and she would have the man buy her something to eat at a convenience store. They would then head to a motel.

In the event that she didn't find a man, she would stop by supermarkets for the free samples offered to customers.

When she did go spend time with a man, she would occasionally be choked or hit, and one john even tied her arms and legs.

At times, she thought she “might die here” at times, but she did not have any other choices to survive.

She estimated that she slept with some 100 patrons, including those she lived with for several weeks to an entire year. Among them, there was no one who did not demand sex.

All the men, who didn't tell her their names, had sex with her and then left afterward as if nothing had occurred.

The young woman said she knew all too well that she was simply being used to satisfy their sexual desires.

“I longed for a moment of warmth,” she said. “I was not needed by anyone, so I wanted to feel that I was necessary to someone even though they simply just wanted to sleep with me. Because of that, I did not see myself as a victim.”

The woman said she even forget what it was like to experience such emotions as sorrow and pain. Still, while suffering emotionally, she could not stop cutting her arms with a utility knife.

She also took prescription psychotropic tablets she kept in large amounts, because she tried to take her mind off her suffering by hurting herself.

“I still am alive simply because I have not been killed or died,” she said.

She suffered from depression, post-traumatic stress disorder (PTSD) and an eating disorder.

The woman saw her life turned around a year ago, when she found a support group on the internet. The organization helped her to receive public livelihood protection assistance, eventually finding her a home, as authorities decided her psychological condition is significantly unhealthy.

The emotional experience at the Flower Demonstration at Tokyo Station does not appear to be enough to make up for her loneliness. At times, she feels a strong impulse to return to her gigolo club companions whenever she receives an e-mail from one saying, “I cannot live without you.”

The woman is now trying hard to protect herself, as she recently found a friend to talk over her problems with.

“I manage to survive one day at a time and just repeat doing that,” she said.

Having children stay at one’s home without their guardians’ permission could constitute a violation of the law against kidnapping of minors.

According to the National Police Agency, 260 or more abduction and human trafficking cases involving minors were annually confirmed both in 2018 and 2019, far exceeding the average number of 180 recorded in the past.

Some 17,000 boys and girls younger than 20 have been reported missing to police per year over the past three years, after they run away from home.

Yumeno Nito, 30, head of a group called Colabo, which seeks to create a society where troubled children can live free from exploitation and violence, said she has received many complaints from girls who cannot or feel reluctant to live with their families.

According to Nito, such girls attempt to seek help, though sometimes inexplicitly, at homes, schools or child consultation centers. But they feel adults do not take their complaints seriously, resulting in despair and distrust of them.

“The children have given up on themselves because adults have expressed disappointment at them on many occasions,” said Nito. “Complaints come mainly from those aged 15 through 18, and nearly all of them seek places to stay through social media and have been sexually victimized at the men’s homes.”

As the novel coronavirus spread, 850 young people, 2.5 times more than usual, contacted Colabo for advice between March and mid-November this year.

They reported problems such as not knowing where to spend time as their part-time workplaces or schools were closed. One runaway lost a place to live in after a cybercafe shut down.

Listening to their accounts, Nito has accompanied those needing assistance to visit child consultation centers or municipal offices as necessary. Some of those seeking help were allowed to stay at Colabo’s shelter.

The number of girls taking shelter at Colabo has topped 60, and Nito also helped children who had fled from their homes to receive subsidies linked to the government's pandemic aid.

“Society and adults should determine why children ran away from their homes, although they often deem these girls as troublemakers,” Nito said. “No place or environment have been developed in which the girls can share the issues they have with safety and security.”

“Society and adults have not realized that they often victimize children in some way on their own,” she continued. “The issue should be regarded as involving adults, not girls.”