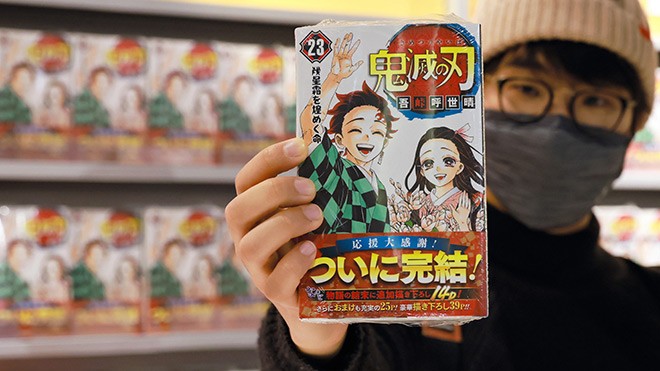 A customer buys the final volume of the comic “Demon Slayer: Kimetsu no Yaiba” at Tsutaya Shibuya shop in Tokyo on Dec. 4. (Tatsuya Shimada)

Fans of the wildly popular manga comic “Demon Slayer: Kimetsu no Yaiba” rushed to stores to open their wallets for the final volume in the series, published on Dec. 4.

The Shibuya Tsutaya book shop in front of Shibuya Station prepared to sell 3,300 copies of volume 23. After it opened at 10 a.m., fans rushed to the basement sales floor so they can finish the series.

“I want to read it as soon as possible,” said a woman in her 20s. “Are there any benches near here?”

After watching the anime for the first time last week, she became so excited about the series that she rushed to read the comics and watch the movie.

“It is good timing that the final volume just came out. I am very happy about that,” she said.

“I came here because I thought that it would sell out quickly in small bookstores,” said a man in his 20s. “I will miss the comic now that it is ending, but as a fan I want to enjoy reading the final battle and about the future of the protagonist.”

According to its publisher, Shueisha Inc., the breakout manga by cartoonist Koyoharu Gotoge enjoyed an initial print run of 3.95 million copies and the cumulative total for the series exceeded 120 million copies.

The comic’s serial run in the Weekly Shonen Jump comic anthology ended in May.