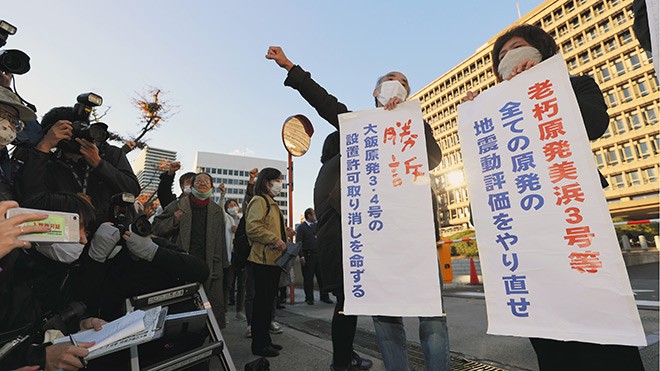 The Osaka District Court on Dec. 4 sided with plaintiffs who argued that the safety guidelines underestimated the maximum possible movement generated by an earthquake around the No. 3 and No. 4 reactors at the plant, operated by Kansai Electric Power Co.

However, the lawsuit filed by about 130 residents who live in Fukui and six neighboring prefectures did not seek a temporary injunction, so the two reactors can continue operating until the ruling is finalized.

The tougher safety standards were adopted after the Great East Japan Earthquake and tsunami caused the triple meltdown at the Fukushima No. 1 nuclear power plant in 2011.

The lawsuit revolved around whether the basic earthquake ground motion figure used by Kansai Electric in its safety measures was appropriate.

Electric power companies that operate nuclear plants set their own basic earthquake ground motion figures. The NRA uses its screening guidelines to determine if the calculated figures are appropriate.

In 2017, the NRA approved the safety measures for the No. 3 and No. 4 Oi reactors, as well as the maximum 856 gals, a measure of ground acceleration, used by Kansai Electric, paving the way for a resumption in their operations.

The plaintiffs sought a retraction of the approval, arguing that Kansai Electric underestimated the scale of a possible earthquake striking in the area around the nuclear plant.

According to the lawsuit, Kansai Electric estimated the length and width of faults that could trigger earthquakes in the vicinity of the No. 3 and No. 4 reactors. It also took into account other data, such as the estimated quake scale based on the figures for the fault.

But the plaintiffs took exception with how Kansai Electric estimated the quake scale.

The utility used a calculation method that said the scale of the quake would likely be a certain level based on the size of the fault area. This method is used by other electric power companies in calculating basic earthquake ground motion around their nuclear plants.

The plaintiffs argued that this calculation method only produces an “average” for the quake scale, meaning that the safety measures are not based on the maximum strength of a possible earthquake in the area.

They also brought up a newly included provision in the NRA’s screening guidelines that says consideration should be given for the variability that arises due to the calculation methods used.

The plaintiffs argued that provision means that utilities must consider the possibility that the basic earthquake ground motion would likely fall into a range that was higher and lower than the average.

They calculated that if such a range was taken into consideration, the basic earthquake ground motion figure for the Oi reactors would be at least 1,150 gals.

Therefore, they said, Kansai Electric’s safety measures did not meet provisions laid out in the law for nuclear reactor regulation.

Lawyers for the central government tried to brush aside the plaintiffs’ arguments as “something they came up on their own and not based on scientific knowledge.”

They argued that Kansai Electric used a wider fault area in calculating the basic earthquake ground motion, and that additional leeway meant there was no need for the utility to take into consideration the variability called for by the plaintiffs.

The court, however, accepted the plaintiffs’ case and ordered a retraction of the approval of the Oi plant’s safety measures.

The ruling was the fourth victory for resident plaintiffs seeking a temporary injunction or retraction of government approval.