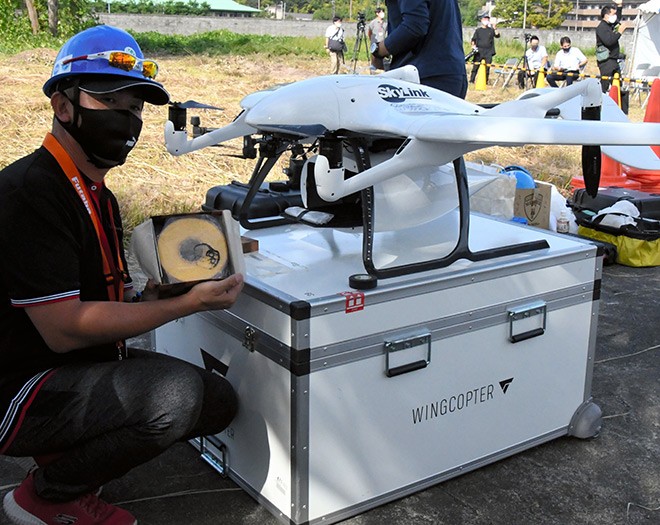 A team member loads a "baumkuchen" cake onto a drone for a test flight over Lake Biwa. (Senichiro Ando)

When a drone made a test delivery and passed over massive Lake Biwa, it made sure to save room for dessert.

Test drone flights such as these are becoming common in the skies overhead as online retailers to parcel delivery companies and even a cake shop are climbing aboard.

OUT OF SIGHT FLIGHT

In the baumkuchen trial, the drone delivered the tasty goods in just 16 minutes. A car driving from where the drone took off to its destination would have to navigate 73.2 kilometers of roads around Lake Biwa, a route that would normally take about 80 minutes.

The drone, made in Germany no less, was 178 centimeters long and weighed 7.7 kilograms. It cut over Lake Biwa, Japan's largest lake, at a speed of 80 kph.

The baumkuchen was made by Club Harie, a popular bakery in Omi-Hachiman, Shiga Prefecture. The bakery was chosen to provide the cargo for the test flight because it allowed the area in front of the establishment to be used as the launching pad.

Members of the flight team monitored the drone from the departure area and the display indicated the aircraft had landed safely in a port at Takashima, also in Shiga, eliciting cheers and applause from the team.

The test flight was organized by SkyLink Japan, a Kyoto-based company that sells and repairs drones.

A company employee was told by an employee of an automobile company that had done business with SkyLink Japan about the time that had to be spent to submit paperwork from company offices in Takashima to Moriyama on the opposite shore of Lake Biwa where the local transport branch office is located.

"It would be much easier going over Lake Biwa," the auto company employee said.

A key point of such long-distance drone flights is the ability to navigate the unmanned aircraft after it leaves the visual line of sight of the operator.

That led to the test flight, which required the cooperation of companies that operate and navigate drones, such as WorldLink Protech of Otsu, also in Shiga, and MM Lab Co. of Tokushima on Shikoku island. Tokushima and Kyoto universities also took part in the test flight.

In March, the team successfully delivered cargo in Tokushima Prefecture to a cape and island about six kilometers from the departure site.

That successful record led the transport ministry to approve the test flight plan over Lake Biwa.

“There is huge significance in flying out of the visual line of sight for such a long distance," said SkyLink Japan President Shinya Suda, 41. "We want to create a new commercial area by using drones.”

Nagoya-based Prodone Co., a manufacturer of commercial drones, has conducted about 100 successful long-distance, out-of-sight test flights since they were begun in April.

On two occasions, the company has completed circuit flights above Shima, Mie Prefecture, which each lasted 90 minutes.

“That would be a distance never before seen in Japan,” a Prodrone official said. Along the Seto Inland Sea are many islands that have witnessed a steep population decline.

In July, venture capital company Kamomeya of Takamatsu, also on Shikoku, made a successful test flight to an island four kilometers away that does not have a hospital. The eventual goal is to deliver medicine using the drone.

The online retailing giant Rakuten Inc. has conducted test flights since 2016 in 13 prefectures and plans to begin a new service using drones from 2021 to isolated areas in the mountains or on islands where residents face major hurdles in shopping.

The parcel delivery company Sagawa Express Co. has set a goal of commercializing deliveries using drones by fiscal 2022 and has begun or will begin test flights this fiscal year in the mountainous areas of Fukui, Shimane and Kagawa prefectures.

Meanwhile, Yamato Holdings Co., another major parcel delivery company, has been cooperating with a U.S. helicopter company since 2018. Last summer, a drone flying at 160 kph successfully carried 32 kg of cargo to a U.S. suburb. By the early 2020s, Yamato Holdings wants to use drones to transport cargo between major parcel bases.

The Ina city government in Nagano Prefecture began a service for residents in mountainous areas in cooperation with KDDI Corp. and a local cable TV station in August.

Products are loaded onto the drone at a roadside retail outlet and delivered to a community center near where the residents live. The drones mainly fly over rivers.

Drone flights are categorized into four levels with the most difficult being level 4 for flights out of the visual line of sight and over inhabited areas.

The Ina service is at level 3 because the drones mainly fly over uninhabited areas.

Under the Civil Aeronautics Law, level 4 flights are banned in Japan. But government officials are moving ahead with plans to revise the law to allow for level 4 flights after fiscal 2022, depending on the outcome of various test flights.

An official in the Cabinet Secretariat section handling drone flights said, “The use of drones will be limited if only level 3 flights are allowed. We want to move toward a more convenient society in which drones can be used in major urban areas.”