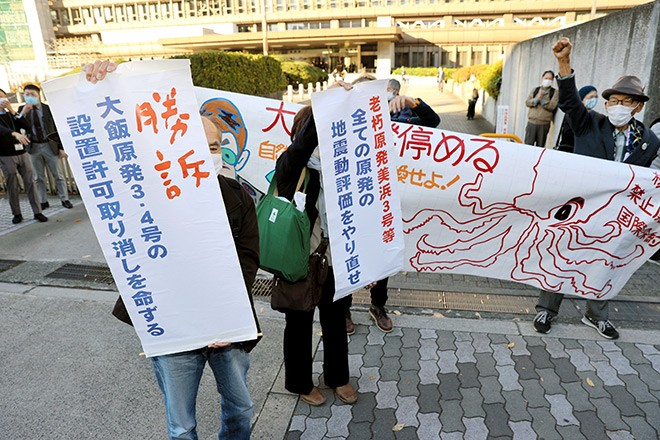 Plaintiffs hold up signs in front of the Osaka District Court on Dec. 4 after it ruled in their favor and retracted the approval given for a resumption of operations at the No. 3 and No. 4 reactors at the Oi nuclear power plant in Fukui Prefecture. (Yuki Shibata)

The Osaka District Court stunned many in the nuclear power sector by ruling Dec. 4 the Nuclear Regulation Authority had failed to adequately consider the possibility of stronger-than-expected earthquakes striking near a nuclear power plant.

In light of that finding, the court retracted the NRA’s approval of safety measures for the No. 3 and No. 4 reactors at the Oi nuclear power plant operated by Kansai Electric Power Co.

The district court said the nuclear watchdog body had failed to abide by its own stricter guidelines when screening the basic earthquake ground motion figure submitted by Kansai Electric to gain approval to resume operations at the Oi reactors.

“We were confident about the results of our screening, so it is a shock to have that rejected,” said an NRA source involved in the screening process.

After the triple meltdown at the Fukushima No. 1 nuclear power plant triggered by the 2011 earthquake and tsunami disaster, the NRA implemented tougher safety measures in the hope that another natural disaster would not cause such an unexpected calamity at other nuclear plants.

But the NRA said that was insufficient and instructed the utility to raise the figure roughly 1.2-fold to 856 gals. However, the Osaka District Court said the NRA did not go far enough in considering the possible strength of a major earthquake hitting the area around the Oi plant.

The court described the figure used by Kansai Electric and approved by the NRA as nothing but an “average” and said the NRA “never considered the possibility of an earthquake much stronger than the average figure.” That failure put the NRA in violation of the law, the court ruled.

Another NRA source, clearly perplexed by the court ruling, said, “If we took into consideration all possible factors, we would end up reaching a calculation for a phenomenon that would never occur.”

There are concerns the ruling could affect operations at other nuclear plants because the NRA in effect uses the same calculation measure to come up with the basic earthquake ground motion figure in its screenings of other nuclear facilities.

In particular, the Takahama nuclear plant that is also situated in Fukui Prefecture like the Oi plant not only used the same calculation method, but the seismic fault used to come up with that figure is the same one used in calculations for the Oi plant.

The latest ruling did not order a review of the screening guidelines used by the NRA or the tougher safety standards. Moreover, higher courts have frequently overturned lower court rulings that went in favor of plaintiffs seeking a temporary injunction.

“This is still at the court of first instance,” noted another NRA source. “It will not mean an immediate review of how the basic earthquake ground motion is calculated. It is too early to say this will affect other screenings because the Supreme Court has not yet finalized the ruling.”

However, plaintiffs and their lawyers were overjoyed by the ruling and said they were optimistic it will influence lawsuits in other courts.

“It is extremely significant that the court pointed out that the central government had ignored the very rules it created,” said Fumio Takemura, a lawyer for the plaintiffs.

In its screening guidelines, the NRA included wording that said variability arising from the calculation method used should be taken into consideration when looking at the basic earthquake ground motion figure.

The court looked at how that new provision was included and concluded that because experts on earthquakes and tsunami were part of the panel that came up with the wording, the NRA was obligated to consider the possibility of much stronger earthquakes than the average figure presented by the electric utility.

However, the court said the NRA did not bother with such considerations. It called the approval illegal, citing extreme negligence on the part of the agency.

Another major difference in the latest ruling is that serious doubts were raised about the very screening process for nuclear plants.

In past rulings, courts have touched upon insufficient evacuation plans or inadequate studies into seismic faults near the nuclear plant. But the latest ruling said the screening process related to the basic earthquake ground motion itself was incorrect.

(This article was compiled from reports by Norihiko Kuwabara, Takashi Endo and Hideki Muroya.)