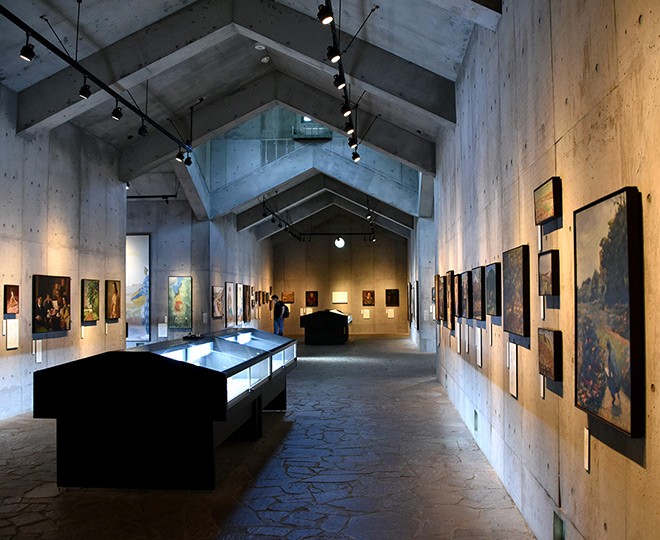 UEDA, Nagano Prefecture--A small private art museum here dedicated to displaying the works of Japanese students drafted as soldiers and killed on the front lines during World War II is now fighting for its survival.

The facility that opened in this central Japan city in May 1997 is called Mugonkan, which roughly translates as silent museum.

Its founder and director, Seiichiro Kuboshima, wonders how to ensure the museum and its exhibits will be passed down to future generations.

Aside from his age, the 79-year-old is in declining health.

The novel coronavirus pandemic may be the final nail in the coffin. As of the end of November, the museum had only about half the number of visitors in 2019.

When it first opened, 200 or so family members of the artists whose works are on display were still alive. Now there are only six.

In late October, the beginning of the changing autumn foliage in the Shiodadaira area where Mugonkan is located, the museum had about 120 visitors even though it was a weekday.

“In winter, there are days when we have no visitors,” Kuboshima said. “I wonder if we should continue to remain open year-round when I think about the maintenance costs.”

Many of the works on display are by fledging artists who had not yet established themselves professionally. Most were probably in their early 20s and all male as they were drafted by the Imperial Japanese Army or Navy.

But statements by relatives of the slain artists about their upbringing, as well as letters sent from the front to family members and girlfriends in Japan, paint a picture of young men engrossed in their art even as Japan as a whole was marching toward war and destruction.

Ikuro Anzai, 80, director emeritus of Ritsumeikan University’s Kyoto Museum for World Peace, said Mugonkan had many fans because of its inseparable ties with Kuboshima.

The Kyoto Museum for World Peace has set aside space for an annex to the Mugonkan. Anzai also heads the Mugonkan foundation.

Kuboshima worked to open Mugonkan because he felt doing so would help him overcome his own past difficulties experienced in the tumultuous years after the end of World War II.

“I felt the contrition disappear one by one as I went around to meet with the bereaved families and was thanked by them,” Kuboshima recalled.

He has talked about that experience in speeches he gave around the nation as well as in books he wrote.

Mugonkan is registered as an ordinary incorporated foundation. It relies on donations and a 1,000-yen ($9.60) entrance fee for its revenues.

Last year, Kuboshima sold his private collection of art works to the Nagano prefectural government for about 200 million yen. While that should tide over Mugonkan for the next few years, Kuboshima said the art museum would run out of operating expenses in six years unless the flow of visitors improves.

Some people have suggested that Mugonkan depend on public funds, but Kuboshima is dead set against that idea.

“We cannot use government money to operate an art museum of students whose lives were taken away from them by the government,” Kuboshima said. “I have always felt there was significance in having the general public contribute their money.”

“Mugonkan has a huge social significance,” Anzai said. “Priority should be placed on its responsibility of passing on the memory of the war.”

With the uncertainty over Mugonkan’s future, members of the younger generation have stepped forward with ideas to help preserve the works.

In August 2019, Seina Hareyama, the president of the Koseisha publishing company based in Tokyo’s Kanda district, proposed establishing a database of the artworks and belongings of the students. Koseisha already has a well-used database of magazines published in the Meiji (1868-1912) and Taisho (1912-1926) eras.

She first visited Mugonkan in spring 2019.

“When I saw the damaged paintings, I felt there was a need to create a database of photos of the artworks and belongings so it can be viewed from anywhere,” Hareyama said.

About 600 works and belongings of about 130 art students are stored and displayed at Mugonkan.

Kuboshima’s eldest son, Kenji, 46, who heads his own information technology company, has begun working on a computer system to serve as a database containing the artworks and basic information about each art student.

Besides the artworks, Kuboshima also feels it is important to pass on factual information about the situation facing the students when they created the works and how they met their deaths.

He feels he must work fast as memories of World War II fade with each passing year.

The last thing Kuboshima wants is to have Mugonkan turned into a feel-good story about young Japanese dying graciously in war.