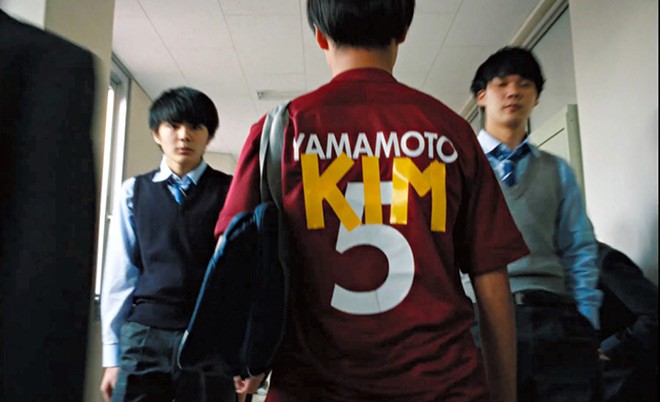 An ad released online on Nov. 28 by Nike Japan shows an ethnic Korean girl in a uniform with her family name of Kim added on the back. (A screenshot from the ad)

A recent advertisement by the Japanese arm of Nike Inc. has been lauded for sending an inspirational message about using sports to help overcome an identity crisis.

Others, however, have blasted the commercial as misrepresenting the realities of Japan and even attacking the country.

The commercial video, released online on Nov. 28, features three female students--two of mixed heritage--who face bullying and discrimination by their peers. They wonder if they should act or appear differently to fit in better.

As the commercial shows the girls intensely training for soccer, they decide against changing themselves.

In one scene, an ethnic Korean girl wears a uniform with “Kim,” a common Korean family name, taped over the Japanese name of “Yamamoto.”

“They say one day things will get better, that everything will change. But we won’t be waiting around for that,” the girls say in the video.

The on-screen text translates as, “Keep moving: yourself, the future.”

Yuki Nagasato, who played on the national women’s soccer team, appears in the ad, as does an image of tennis star Naomi Osaka, but the commercial does not pitch any specific product.

Viewed more than 10 million times by the evening of Dec. 3, the video earned broad approval.

“I feel so heartened by the mere fact that a message like this is being sent out and is being approved by so many people,” one commenter said.

But messages of intense anger also flooded in.

“I see every day how (students of different nationalities) are going to school happily together,” said another.

Some posters claimed that discrimination does not exist in Japan and described the ad as an attack on the country. Others have called for a boycott of Nike products.

A few critics pointed out that Nike was on a list of more than 80 companies, including Sony Corp. and Apple Inc., that the Australian Strategic Policy Institute released in connection with the Uighur issue in China.

The think tank affiliated with the Australian government said Uighurs transferred from detention camps in China’s Xinjiang Uighur Autonomous Region were working in factories that are in the supply chains of those global brands “under conditions that strongly suggest forced labor.”

Nike has for some time been sending messages on racial issues.

When Osaka protested U.S. police violence against Black people, the Japanese arm of Nike posted her picture on Twitter with advertising copy that translates as: “This victory is for myself. This fight is for all.”

For another advertisement, Nike hired Colin Kaepernick, the NFL quarterback who protested racial discrimination by choosing to kneel instead of stand for the playing of the U.S. national anthem before games.

“We believe sports have the power to show what a better world looks like and can serve as a driving force for prompting positive changes that help bring the world forward,” a Nike Japan representative said in a statement, referring to the latest ad. “Nike will continue calling loudly for inclusion, respect and fairness for all people.”

“Nike’s video is a graceful message that says the company is not making products for those who resentfully argue that there is no discrimination in Japan,” she said.

Themes and stories have become important elements in online ads. There is also rising public interest in the social responsibility of giant businesses.

“Nike likely decided that winning the love of sympathizers of the company’s messages will help enhance its brand value,” Tanaka said. “Nike is probably satisfied with the consequences of the ad, including everything from comments by critics to media and blog coverage, which has prompted debate.”

The outrage in Japan over the ad has drawn attention from overseas media outlets.

The BBC said the ad “has sparked fierce debate as Japan is unaccustomed to openly discussing sensitive issues such as race.”

A teacher at a school for ethnic Koreans in Japan said he knows that online opinions do not represent the whole story, but he tries to avoid reproachful comments.

“I am afraid I could feel like I was beaten into the ground if I ever saw them,” the teacher said.

He said he showed the Nike ad on a big screen to the students the day after it was released, believing it would give them an opportunity to look at their own identity problems as ethnic Koreans in the broader context of issues facing minority groups.

The students said the girls in the video were “cool,” the teacher said.

“Perhaps those who resent the ad want to discourage other companies from challenging taboos as Nike did,” he said.

Hiromi Machiyama, a TV writer and columnist, said she has heard many people say that discrimination against non-Japanese and people of mixed ancestry does not exist in Japan.

Machiyama’s father is an ethnic Korean.

“The most harrowing thing for people facing discrimination is to be flatly told there is no discrimination,” she said. “The latest ad is premised on the presence of discrimination, and it has brought the problem, which has been kept invisible, out on the table for discussion. That alone is enough to make me happy.”

Discrimination against ethnic Koreans used to be taken up typically by documentaries and other forms of media. But Nike used a “trendy shooting style and editing rhythm” in covering the subject, helping younger people learn about the issue, Machiyama said.

“The backlash to the video was well predictable,” she said. “I feel happy that a step forward has been made. I hope young ethnic Koreans and other children who are suffering because they are different from others will learn that some people are in favor of the ad.”

(This article was written by Mayumi Mori and Takumi Ono.)