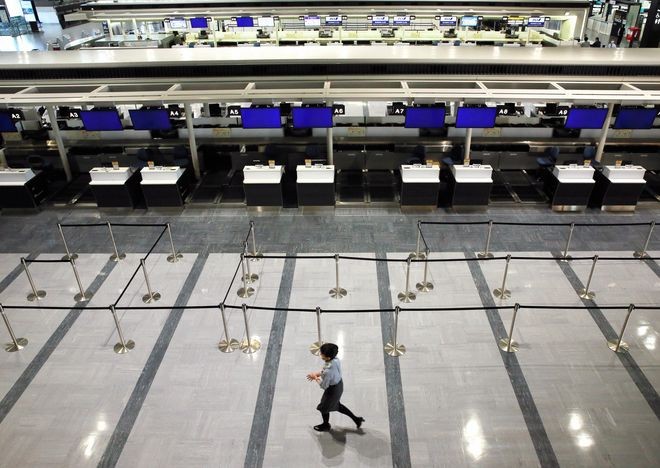 To assess Japan's antivirus measures ahead of the Tokyo Olympics and Paralympics, the government is considering accepting small group tours from overseas in the spring, which are currently prohibited.

The trial run will be an attempt to help revive the nation's hard-hit tourism industry amid the COVID-19 pandemic after the Olympics and Paralympics are staged.

However, these small number of foreign tourists on the special tours will be the only ones authorized to enter Japan under the government program for now.

“We fear that we may not be able to hold the Olympics and Paralympics if the coronavirus spreads in Japan following the arrival of foreign tourists,” a senior government official said.

The government expects to accept the special tours from other parts of Asia such as Taiwan and China, both of where the coronavirus outbreak has been relatively contained.

But it will make a final decision as to when the tours and from which country or territory will be allowed after closely monitoring the state of the pandemic in Japan and overseas.

As part of precautions against the virus, the participants of the small tours are expected to travel on a chartered vehicle, such as a bus, and move separately from other groups of foreign tourists to avoid large crowds at a tourist spot.

The government has eased travel restrictions for international visitors in recent months on the condition that they isolate themselves for two weeks after their entry to Japan as a precaution.

But tourists are not included among such visitors.

Data from the Japan National Tourism Organization showed that travelers to Japan, including business people, dropped by about 99 percent from a year earlier in October for the 13th consecutive month of a year-on-year decline.

Attracting tens of millions of inbound tourists is a pet project that Prime Minister Yoshihide Suga has pushed to expand the Japanese economy.

The government is maintaining the target of luring 60 million inbound tourists in 2030, despite the crippling health crisis.

After accepting visitors to the sports extravaganza, Japan plans to allow tourists to enter the country in stages, according to a government plan.

Tourists arriving in Japan for the Olympics and Paralympics will likely be allowed to use public transport during their stays.

So, the government is weighing allowing participants of the special tours to board some cars of Shinkansen bullet trains.

Under the current plan, however, they cannot use the public transportation system, in principle, after their entry.

The sizes of such special tours have yet to be decided.

A set of precautionary measures for short-term business travelers who can enter Japan without a self-isolation period will be also applied to participants of the planned tours.

Travel agencies will be responsible for the tours. Tour conductors are expected to monitor the temperatures of the participants as part of their responsibility for overseeing their health conditions.

Participants will need to present certificates showing that they tested negative for the coronavirus and purchase travel medical insurance before their arrival in Japan, as well as disclose their activity plans for their stay.

In addition, tour participants will be asked to separate themselves from Japanese travelers at a hotel or a tourist destination and use a contract-tracing app to confirm if they were exposed to anyone infected and the LINE app to report their health condition.