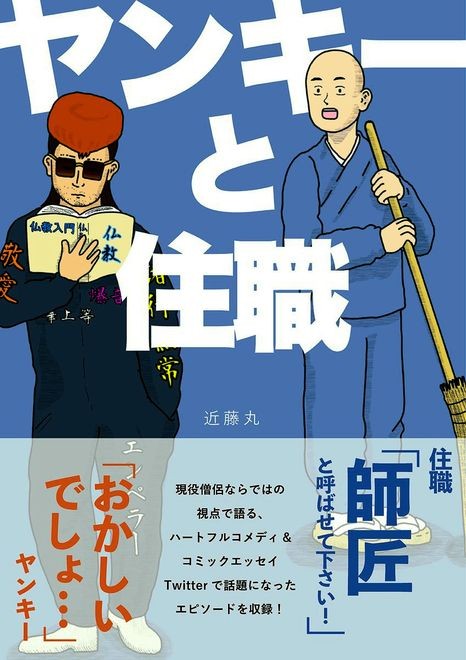 NYUZEN, Toyama Prefecture--Buddhist priest Yoshiyuki Kondo is offering his own brand of enlightenment through a manga comic series he created after his own life took a difficult turn.

Kondo, a former schoolteacher, said he hopes the series titled “Yankee to Jushoku” (Bad boy and chief priest) will help others find wisdom when they encounter upheavals in their lives.

His strategy has proven popular.

“I was emboldened when a reader told me that my work gave them the power to live,” said Kondo, 36.

The series revolves around an unlikely friendship between a Buddhist monk and a delinquent youth. The young boy is a member of a motorcycle gang who happens to be well-versed in Buddhism, while the young chief priest struggles to be at ease at social gatherings.

Through the pair’s casual exchanges and witty banter, readers can deepen their understanding of Buddhist teachings, Kondo explains.

In an installment that explores the Buddhist “hige-man” concept, the monk becomes disappointed when his temple’s social media account gets fewer hits than one operated by a more popular temple nearby.

“I have no talent,” the priest says, to which the boy responds, “You should not become depressed so quickly.”

The boy notes that both “hige” (self-deprecation) and “jiman” (pride) are signs that a person is overly concerned with what others think and too busy comparing themselves to others.

“Don’t you think that great people aren’t too prideful or too down on themselves, either?”

The priest replies, “I am not great because I often underestimate myself.” The young biker calls his remark “hige itself.”

In another episode, the manga touches on the phrase “tenjo tenge yuiga dokuson,” which is often misunderstood and sometimes displayed on bikers’ jackets in Japan.

Many mistakenly believe it stresses an individual’s superiority over others, but in reality the notion refers to the equal value of all people.

The idea for the manga came to Kondo after hitting roadblocks in his own life and work.

He first set out on his Buddhist path in 2012, researching the teachings of the monk Shinran (1173-1262) at Ryukoku University’s graduate school. Kondo decided to teach Buddhism at junior and senior high schools.

Kondo worked at private Buddhist schools in Kyoto, Osaka and Fukuoka prefectures, but quickly find the job overwhelming. He was so busy overseeing club activities and preparing papers for classes the next day that he would often continue to work until 2 a.m.

Kondo said he abandoned his career as a teacher after five years to allow him time “to reflect on my life.”

He returned to the family home in Nyuzen, Toyama Prefecture, this past spring. Having had a passion for painting since his childhood, Kondo took it up again and started creating his own manga.

As a test, Kondo drew a four-frame comic about Shinran’s principles.

After he posted it on the social media photo-sharing site Instagram, his former students sent him messages praising the work. One called it was “super interesting.”

“That made me realize that manga could be a good medium to convey the appeal of Buddhism to even more people,” Kondo said.

Kondo’s own interest in Buddhism was sparked at the age of 14, when a relative abruptly committed suicide.

Kondo asked a senior priest who attended the funeral whether “killing oneself is a bad thing.”

The monk gave him an answer he did not expect.

“No one’s ways of living and dying could be bad,” the priest told him. “That is because all the spirits try to live to the best of their abilities.”

The monk’s words helped him through that difficult time. After spending several years studying material science at Tokai University’s School of Engineering, those words eventually became the catalyst for him to enter the priesthood.

Now, Kondo has found an outlet where he can share similar words of wisdom to help others.

Kondo serialized “Yankee to Jushoku” on Twitter in late May, and it quickly drew attention.

A Tokyo-based publisher contacted Kondo to publish his work online in comic form in October.

“Though I am a shallow person, Buddhism offers deep insight,” Kondo said, pledging his determination. “I will humbly continue creating manga.”