1st ‘community fridge’ opens in Okayama for people in need 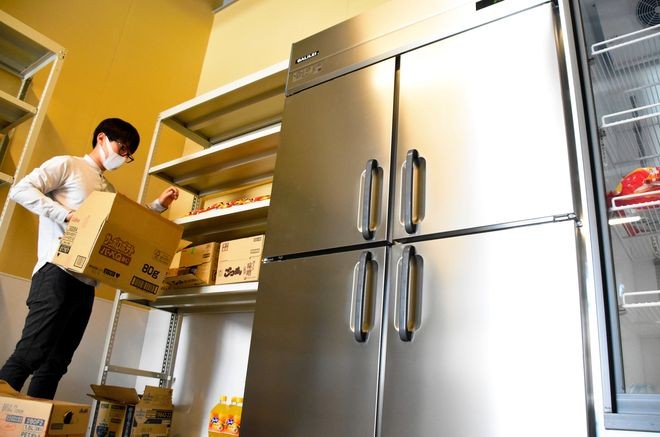 OKAYAMA--When Kenichi Narita went to Britain to get tips on opening a "community fridge," he saw some practices at British food banks that wouldn't translate well to Japan.

Narita, 42, who has been involved in the food bank movement in Okayama Prefecture, helped organize Japan's first community fridge that is designed to offer privacy for recipients and ease safety concerns.

“We want to ensure food safety and encourage people to use the community fridge service while more at ease,” he said.

The newly opened food fridge in Okayama offers fresh vegetables and perishables for free around the clock. It's a godsend for parents struggling to raise children and needy students in the midst of the coronavirus pandemic.

The community fridge, which comprises a business-use freezer and refrigerator, is located in an unmanned warehouse at a commercial complex building in the city’s Kita Ward.

Inside the fridge are lettuce, tomatoes, sausages, natto and other fresh foods donated by 60 local supporters, including supermarkets. Next to them stands a shelf lined with bread, canned foods and cup noodles, among other items.

All the foods are unopened and within their use-by dates.

To gain entry, recipients need to register in advance. They can enter the warehouse by unlocking the door through a smartphone app and pick up their items any time of the day without worrying about the prying looks of others.

One of the beneficiaries of Okayama's offering is a single mother in her 40s who is raising three children--two junior high school age girls and a son who will start attending elementary school next year.

The woman works for a company but her family's finances have been further strained by the coronavirus pandemic.

“I really appreciate the effort because I cannot afford to buy whatever food I want to buy,” she said.

Takara Shintaku, an official with the Kitanagase Area Management, said he is hoping that the effort to install a community fridge at facilities with easy access will spread around the country.

Narita, who runs a restaurant, said it is important to help Japanese needing assistance feel at ease.

One of the sites in a residential area in London was open only a few hours in the daytime and three days a week. Three or so people of a private group that operates the food bank are always on-site when it is open.

But Narita was afraid that such a set-up may not work in Japan.

He thought that no one should be around at the community fridge in Japan to make people coming for the food feel comfortable and help the effort become popular in the future.

From his experiences in the food bank movement, which is taking root in many parts of the country, he knew Japanese tend to worry too much about the safety of food products.

As a result, some food manufacturers are reluctant about donating their products to food banks due to concerns over food poisoning.

But he believed the availability of a fridge and freezer may ease their worries and allow them to participate.

Rie Kondo, professor of sociology at Okayama Prefectural University, said she hopes that the community fridge project will enable struggling individuals to learn about public assistance and nutrition to improve their well-being through meetings with local officials.

“The community fridge will serve as a venue where people in need of assistance will gain, not just food, but also knowledge of what steps are available as a safety net and for nutrition,” she said.