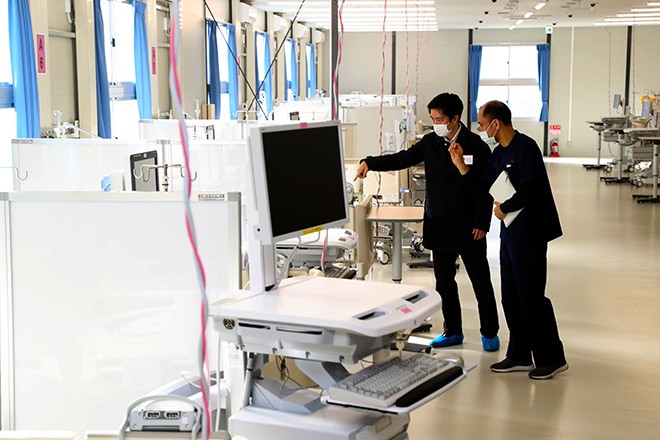 The facility is equipped with 30 beds that have artificial ventilators. But not all of them will be immediately available due to a staffing shortage.

Officials estimated that 130 or so nurses will be needed, but only about 80 nurses have been secured, according to the prefectural government, which has asked the Union of Kansai Governments, the National Governors’ Association and the Defense Ministry to dispatch nurses to the prefecture.

“We need to provide intensive care to severe patients so they can be transferred to a hospital that treats patients with moderate symptoms as fast as possible,” Satoshi Fujimi, who heads the new center, told reporters.

Yoshimura said after his tour that the center “is not perfect, but it was a wise decision to open it” in light of a third wave of the pandemic that has left Osaka officials scrambling to prevent the local health care systems from collapsing.

The prefectural government has asked local hospitals since mid-November to reserve beds designated to treat severe COVID-19 cases for such patients only.

Those beds are sometimes used to treat patients with moderate symptoms when doctors believe their health condition may worsen.

But a sharp increase in severe cases, coupled with a lack of beds to treat the patients, led authorities to urge hospitals in the prefecture to reserve beds only for those who require artificial ventilator treatment.

Officials have also asked the hospitals not to make the beds available for severe patients who have spent a long time being hospitalized if they are at low risk of infecting others.

Yoshimura on Dec. 3 pre-emptively issued a “red alert” for the first time, urging residents and businesses to help curb the fresh wave of novel coronavirus cases.

As of Dec. 6, a record 141 severe COVID-19 patients were hospitalized in the prefecture, and 68.4 percent of the 206 available hospital beds were occupied. Officials said 86 percent of the 164 beds immediately available are currently occupied.

(Compiled from reports by Yuki Kubota and Yusuke Morishita.)