Good Samaritan comes to rescue of Vietnamese in dire straits 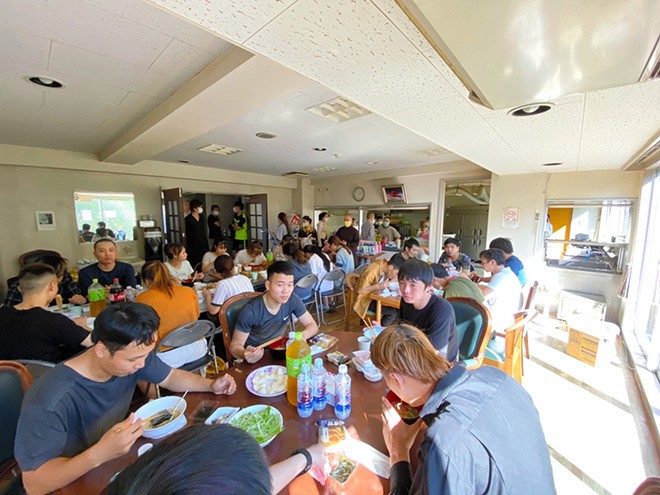 Vietnamese living in a dormitory for a Japanese language school in Chiba Prefecture until they can return home (Provided by Unidos Co.)

Having spent years overseas, Yuichiro Kimoto is only too well aware of the hardships a newcomer can face, which is why he sympathizes so strongly with the plight of Vietnamese in Japan left out in the cold by the new coronavirus pandemic.

Kimoto, 72, is president and CEO of Unidos Co., based in Tokyo’s Shinjuku Ward. The company provides a service called Kyodai Remittance to foreign residents in Japan who want to send money to their families in their home countries.

This past spring, Kimoto learned that many Vietnamese technical intern trainees and students studying in Japan are struggling to survive after they lost their full-time or part-time jobs. He donated goods such as rice to temples and other venues where Vietnamese are seeking refuge.

He also discovered that many of those who want to return to Vietnam have been unable to book flights out because of the health crisis.

The number of Vietnamese living in Japan has increased 10-fold over the past decade to about 410,000.

Through that linkup, Kimoto started a support project this summer. He rented a dormitory at a Japanese language school in Chiba Prefecture close to Tokyo to provide shelter for Vietnamese people and shoulder their expenses until they can return to Vietnam.

Kimoto, who was born in the port city of Kobe, joined a life insurance company after graduating from a university. He left the company two years later and moved to Brazil in 1973. He worked at various jobs in Sao Paulo, including a jewelry shop, and eventually established agricultural and sewing businesses.

After returning to Japan in 1999, he got involved in overseas remittances. His company has 150 or so employees from 19 countries, among them Vietnamese, Brazilians, Peruvians and Indian nationals. The multilingual aspect of the operations allows staff to deal with customers in their native language, such as when on the phone.

Kimoto said overseas remittances by foreign residents in Japan using Unidos’s service has grown 10-fold since the company was established in 2000, adding that many customers are struggling to make ends meet due to the pandemic, but their families back home often face even more severe financial hardship.

Kimoto said the number of remittances rose after the Japanese government this year provided a 100,000-yen cash handout to every resident to help to mitigate the economic impact of the health crisis.

He said he can fully understand the anxiety people have when living overseas.

“In Brazil, I was an immigrant, so I was in the totally same position as migrant workers in Japan,” Kimoto said. “I’ll do anything I can to help them.”

Tri said she is truly grateful for Kimoto's assistance in helping young Vietnamese in distress.