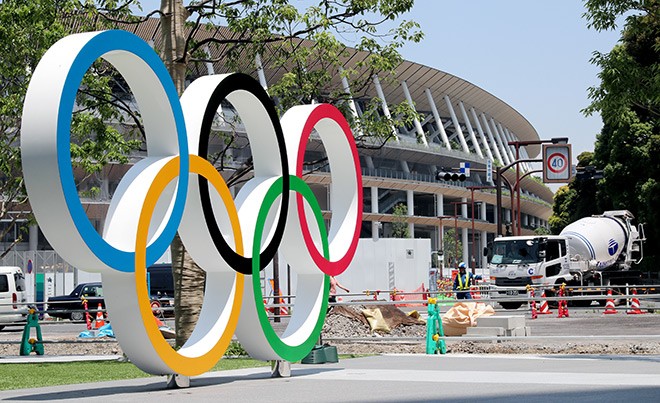 The new National Stadium in Tokyo’s Shinjuku Ward is expected to be the main venue for the Olympic Games next summer. (Tatsuya Shimada)

Japanese residents are torn between trepidation and tentative support for next year’s Olympic Games that are now set to be far more expensive than expected amid a spike in coronavirus cases.

In an announcement on Friday, organizers said the postponed Games would cost an additional 294 billion yen ($2.8 billion) with the bill to be shared by the Tokyo 2020 organizing committee, the Japanese government and the Tokyo Metropolitan Government (TMG).

In total, TMG and the national government, and in turn the Japanese taxpayer, are expecting to pay 191 billion yen to cover the costs of postponement and a raft of coronavirus countermeasures.

Despite the total Games budget now being likely to run north of 1.63 trillion yen, some Japanese residents taking photographs near the newly-built National Stadium on Monday said they believed it may be a price worth paying.

“I think the number of coronavirus infected cases (in Japan) is still smaller than other countries, so I hope they can hold (the Games) somehow under this situation,” said 72-year-old Shiro Terui.

“It also contributes to the global economy as well.”

Satsuki Kataoka, an accountant walking her dog near the stadium, said she accepts that holding the Games during a pandemic brings added costs.

“As a taxpayer, I feel the (extra) budget they compiled is a little bit too large,” she said. “But I do understand that extra expenses are needed due to the coronavirus situation.”

Although Japan has avoided the vast number of COVID-19 cases and deaths seen in other countries across the world, they are now experiencing a third wave.

Support for Japanese Prime Minister Yoshihide Suga’s cabinet dropped to 50.3 percent from 63.0 percent a month earlier, with the disapproval rating rising to 32.8 percent from 19.2 percent, a Kyodo News survey showed.

With over 15,000 athletes from across the world coming to Tokyo for the Games, there are fears that their arrival could cause a spike in COVID-19 cases.

“For me, it is very worrying that various people from overseas are visiting Japan in such a situation,” said 27-year-old Ryota Sato. “So, I am not that supportive. I expect it may be cancelled or postponed again.”

Organizers have said they will decide on the number of spectators allowed into Olympic venues in the spring.