Baseball fans wait patiently in line to get the one last noodle from Suimeitei, a beloved concession stand at Meiji Jingu Stadium in Tokyo’s Shinjuku Ward. The stand opened after the 1964 Tokyo Olympics and closed for good on Dec. 6. (Yoshie Watanabe) 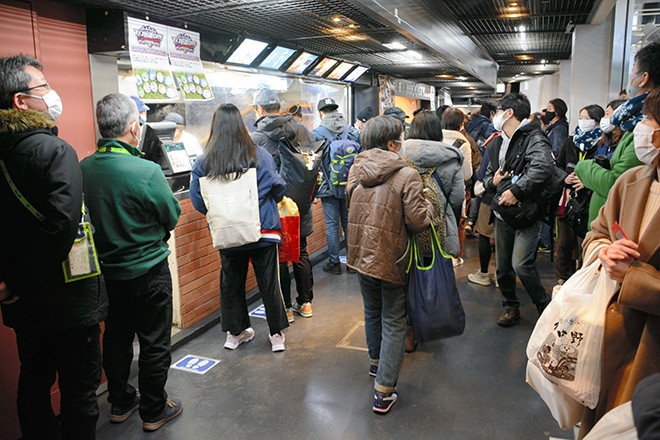 Baseball fans wait in line to order noodle soup at Suimeitei at Meiji Jingu Stadium on Dec. 6. The beloved eatery shut down after the owner fell ill and the novel coronavirus spread across Japan. (Yoshihiro Ando)

People from near and far, from hungry students to baseball stars, lined up at Meiji Jingu Stadium in central Tokyo for their last taste of a savory dish served by a legend at the ballpark.

Suimeitei, a small concession stand tucked in the hallway behind home plate on the first-base side of the stadium, offered its last bowl of noodles on Dec. 6.

For 56 years, Suimeitei has warmed the bellies and hearts of countless baseball players and enthusiastic fans at the historic ballfield in the capital’s Shinjuku Ward. From next season, however, they will have to find comfort in something else.

The ailing health of the long-time owner, the COVID-19 pandemic and other factors led to the closure of the food stall. Jingu Stadium itself is scheduled for demolition and renewal after the Tokyo Olympics next summer.

People craving the noodles in tasty broth made from dried bonito and dried kelp formed lines well before the stall opened at 8:30 a.m. on Dec. 6.

Hisashi Sasaki, 49, a company employee who lives in Tsukubamirai, Ibaraki Prefecture, headed straight to Suimeitei after the stadium gate opened.

“I eat here every time I come here,” Sasaki said as he slurped up tempura udon with his family.

Junichi Yoshida, a 51-year-old Tokyo resident who arrived with his wife, Takako, 50, also ordered tempura udon. They took the bowls to their seats in the stands.

“The tempura is flavorful and it’s so tasty,” Yoshida said. “It’s sad that this is their last day.”

The Tokyo Yakult Swallows professional baseball team held its annual end-of-the-season fan appreciation event at the stadium on that day. Jingu Stadium has been the Swallows’ home base since 1964.

Customer traffic to Suimeitei remained steady except for a 30-minute period used to alternate the entrants.

Around 1 p.m., more than 50 people stood in line to place orders. The waiting time was as long as 30 minutes.

By the end of the day, Suimeitei served 968 bowls of udon and soba noodle soup.

Suimeitei’s owner, Ritsue Motomura, whom many loyal customers dearly call “okasan” (mum) or “obachan” (auntie), could not be there to serve noodles on the final day.

Motomura, 79, became ill this summer and has been hospitalized.

But her relative, Teruhiro Yamaguchi, 26, ran the operation smoothly on Dec. 6.

“Once again, I realize how much Suimeitei has been loved by everyone,” Yamaguchi said. “So many people have said to us, ‘Thank you’ and ‘Good work.’”

Misa Tasaki, 57, who has worked at the concession stand for years, arrived at the stadium just after 6 a.m. to perfect the final broth.

Tasaki worked part time at Suimeitei’s restaurant located near the stadium when she was a first-year high school student in 1979. The restaurant was run by Motomura’s father.

Meiji Jingu Stadium, which opened in 1926, has been regarded as a sacred place for amateur baseball. In a typical year, the facility hosts more than 500 baseball games, including qualifying rounds for the hugely popular national high school baseball championships.

Norichika Aoki, 38, a veteran outfielder with the Swallows who also played on major league teams, such as the Milwaukee Brewers and the Kansas City Royals, has been a patron of the Suimeitei food stall since his days at Waseda University.

“It is sad that the long-established eatery is gone,” Aoki said, adding that he is wishing for Motomura’s recovery.

Motomura’s father came from Kurume, Fukuoka Prefecture, and opened the Suimeitei restaurant in the Meiji Jingu Gaien area. It became famous for its “chanpon” noodle dish, a Kurume specialty.

The restaurant served an important role at the 1964 Tokyo Olympics by feeding the Japanese swimming team during their pre-Games training.

The restaurant was also used as a waiting room for Yoshinori Sakai, the last runner of the Olympic torch relay. The scene was featured in the final episode of “Idaten: The Epic Marathon to Tokyo,” a Japan Broadcasting Corp. (NHK) drama series that was aired last year.

Shortly after the 1964 Olympics, Motomura’s father decided to open an outpost inside Meiji Jingu Stadium, one of the first concession stands at the ballpark.

While the 1964 Games may have inspired the decision to open the stand, preparations for the 2020 Tokyo Olympics hampered business operations at the restaurant.

Amid the redevelopment project and construction of new National Stadium, a main venue for the 2020 Tokyo Games, the restaurant closed down in October 2018.

The following year, Yamaguchi started helping Motomura at the concession stand. He transformed the neighboring stand that had sold coffee into a meat and pasta place.

Things looked bright, until the novel coronavirus spread around the nation.

The stadium concession business was hit hard. The opening of the professional baseball season was delayed for more than two months. And spectators were banned from games held earlier in the season.

Then Motomura became sick and was hospitalized in August, forcing her to decide to shut down Suimeitei.

“I am so thankful for people’s long patronage over the years,” Motomura said through a relative from a hospital in her hometown of Kurume. “I have nothing but appreciation.”

Nanai has come to Meiji Jingu Stadium for more than 30 years since she was a university student.

“My favorite is tempura udon. I think I’ve eaten 500 bowls so far, easily,” she said.

“The tempura gets so juicy in the broth and remains tasty all the way to the end. The noodles were inexpensive so I could eat them even when I didn’t have much money to eat out,” she said.

Many former and current players shared their memories of Suimeitei.

Shogo Yamamoto, 42, a former pitcher who currently works as a scout for the Fukuoka Softbank Hawks, said he was a loyal customer during his days at Keio University.

His favorite was meat udon. “I ate it before and after a game,” he said.

He said he resumed the habit after he retired and became a scout.

“My colleague even eats it for breakfast. It is delicious and warms my body and heart on a cold day,” Yamamoto said. “The closure is very sad.”

For Yuki Saito, a 32-year-old pitcher for the Hokkaido Nippon-Ham Fighters, Suimeitei’s noodle soup was a “pre-game special meal.”

Saito, who previously starred at Waseda University, said all members of his collegiate baseball team stuffed their bellies with Suimeitei’s noodles.

“It was so tasty, and the next thing you know, I finished the soup,” Saito fondly recalled.

Tetsuya Ikeda, a 38-year-old entertainer and ardent fan of high school baseball, shared his memories of Suimeitei on social media.

“I don’t know how many times I’ve eaten there,” Ikeda said.

Sometimes, he had three servings a day of Suimeitei noodles.

“I had one after arriving at the stadium. Then around lunchtime, I saw someone near me in the stands eating it. The aroma got to me and made me eat it again. It got chilly in the evening, and my body craved it again,” he wrote.

At a major autumn tournament held at Jingu Stadium, when current Fighters first baseman Kotaro Kiyomiya was a high school star and major draw, Ikeda said he stood in line at 4 a.m. to get a ticket.

“I secured a good seat. I left my bag and headed straight down to Suimeitei to thaw out my freezing body and heart,” Ikeda said. “And it wasn’t just me. Many people did the same.

“For me, Suimeitei’s noodles have literally been a bowl of life.”

Just after 4 p.m. on Dec. 6, Suimeitei served its final bowl and Yamaguchi closed the shutters.

The large pans and other items that have been used in the kitchen for years were given to another long-established concession stand.

Yamaguchi will return to Kurume.

“But someday, I want to bring back the taste of Suimeitei near the stadium,” he said.