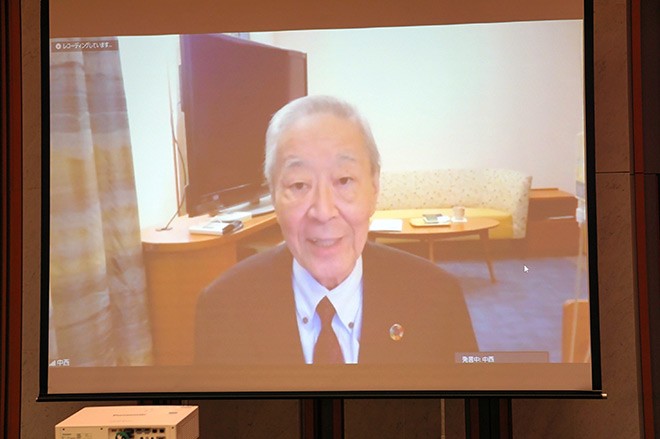 Keidanren (Japan Business Federation) has effectively ruled out an across-the-board pay-scale increase for the first time in eight years because of the novel coronavirus pandemic, the chairman of the powerful business lobby said.

“Looking at the current economic picture, we are in no situation to expect to negotiate a pay-scale increase at the (“shunto” labor offensive next spring),” Hiroaki Nakanishi, who is also chairman of Hitachi Ltd., said on Dec. 7.

Nakanishi held an online news conference from a hospital room where he is being treated for a malignant lymphoma.

He said he talked with Keidanren’s vice chairs about the policies of the management’s side earlier in the day, and they agreed that “a wage increase is difficult because many companies are struggling in the pandemic.”

Negotiations between Keidanren and Rengo (Japanese Trade Union Confederation), Japan’s largest labor organization, are expected to be tougher than usual next spring.

Rengo officials have said a pay-scale increase next spring is necessary to support essential workers in the medical industry, elderly-care providers and distributors of goods during the pandemic. They are also demanding a better deal for people working in small and medium-sized businesses.

Keidanren until this spring had been positive about wage hikes, including an increase in base pay. But the novel coronavirus spread around the world, hammering economies and business operations.

Keidanren’s original proposition discussed at the Dec. 7 meeting said, “It is not realistic to consider an industry-wide, across-the-board wage increase.”

The business lobby did note that the pandemic has had differing effects based on industry type.

The accommodation, restaurant and transportation industries have been hit hard by shrinking demand and they “should be prioritized to maintain their business and employment,” Keidanren said.

“It is difficult to accept a pay-scale increase, and in some cases, they may have to weigh the pros and cons of an annual wage hike,” it said.

On the other hand, “a pay-scale increase is an option” for healthy companies, Keidanren said.

Keidanren has accepted pay-scale increases for seven years from 2014 to 2020. Over that period, major companies have provided average pay-scale hikes of more than 7,000 yen ($67), exceeding 2 percent from a year earlier, according to Keidanren.

The trend started in 2014, when then Prime Minister Shinzo Abe demanded pay raises before the shunto negotiations even began.

Previously, Keidanren had insisted that a pay-scale increase “is absolutely absurd” and “there is no room for discussion.”

But Keidanren started urging businesses to increase wages after calls from the Abe administration. Nakanishi had aimed to free the organization from the government-led shunto trend, but Abe continued his demands.

Prime Minister Yoshihide Suga on Dec. 4 said at a meeting of the Council on Fiscal and Economic Policy, “I want (them) to keep the trend of raising pay that has continued until now in order to avoid going back to deflation.”

Rengo did not demand a pay-scale increase from 2010 to 2013 after the Lehman Shock.

But each year since 2014, Rengo has aimed to achieve a 2-percent annual wage hike and about a 2-percent increase in the pay-scale.

Even in the shunto this year, when the economy was already affected by the pandemic, Rengo achieved about a 2-percent pay increase.

However, some of Rengo’s affiliated labor unions have been cautious about setting numerical targets now.

“We need to work to rectify disparities between the different size of businesses and different employment statuses and demand that all workers have wage standards that match the value of their labor,” Rengo chief Rikio Kozu said on Dec. 1.

Also noting that business performances differ between industries, Kozu said Rengo will work to “bottom-up each industry as much as possible.”

He also showed consideration for hard-hit industries such as tourism, restaurants and railways.

UA Zensen, the largest labor union that covers distribution, services and other industries, has set a shunto goal of a 2-percent pay increase.

The Japan Council of Metalworkers’ Unions, whose members include automobile and electric-appliance makers’ unions, is seeking a pay-scale increase of 3,000 yen or more. But it has provided ranges for the sought-after increases depending on the situation of the affiliated labor unions.

Keidanren will continue discussions and release a report in January announcing the policy of the management’s side for shunto.

Top officials of Keidanren and Rengo will hold talks in late January.

(This article was written by Kazuhito Suwa and Hideaki Sato.)